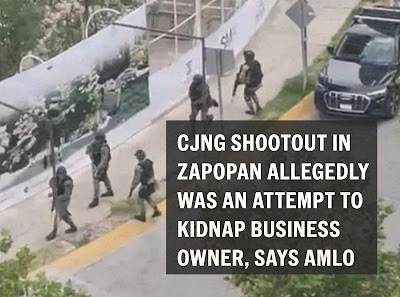 As covered by Sol Prendido yesterday, there was a shootout in the middle of the day in a wealthy shopping plaza in Zapopan, Jalisco.

Now even more footage has emerged and some articles are reporting allegations of the shootout being an attempted hit, by a group of hitmen, on an important figure that had not been named by government officials.

The shootout occurred on October 02, 2022, in the wealthy borough of Zapopan, right outside of the major city of Guadalajara, in the state of Jalisco. 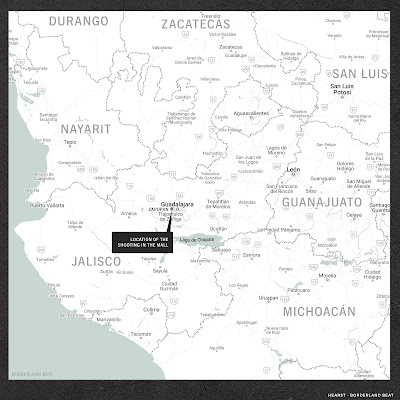 This area is believed to be where many prominent Cartel Jalisco Nueva Generacion (CJNG) figures and their families live. As an example of this, the military searched for Mencho’s daughter Laisha Oseguera after intelligence suggested she was hiding out in the town of Zapopan, less than one year ago. 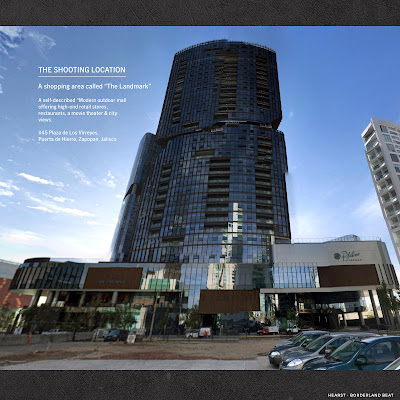 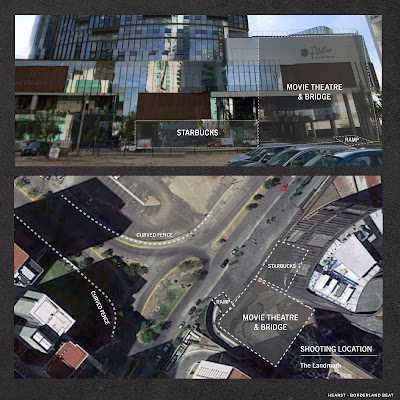 The shooting primarily took place in the area surrounding “The Landmark”, an outdoor shopping area. The stores inside the location range from mid-range (like West Elm, LuluLemon, Emporio Armani)  to high-end, (like Ferragamo, Bentley, Max Mara) and it includes the movie theater Cinemex Platino.

The following is the prevailing narrative about what happened, based on initial media reports. Please note that information on what happened and why it happened may change with time.

At approximately 5:20 pm on October 02, 2022, Informador writes that “according to initial reports, a group of armed individuals traveled to Puerta de Hierro Boulevard, near Patria Avenue, in an attempt to ambush another person. However, the subject of the attack was accompanied by a number of bodyguards who repelled the aggression and a shootout ensued. 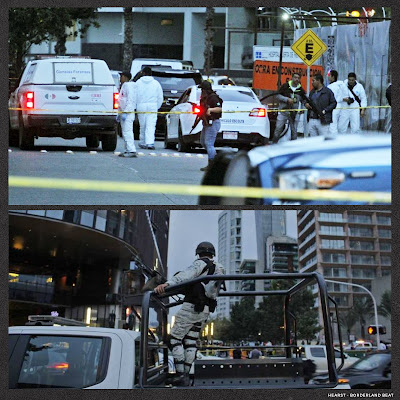 They continue and say that “Later, while trying to escape, several of the assailants ran into an Army convoy patrolling the area and another firefight broke out.” According to the newspaper Reforma, the Army firefight happened because they tried to arrest some of the armed men.

Reforma writes “Prosecutor Luis Joaquín Méndez Ruiz confirmed that a group of armed men arrived [...] to attack a person whose identity has not been revealed, and that his bodyguards responded by shooting back.” 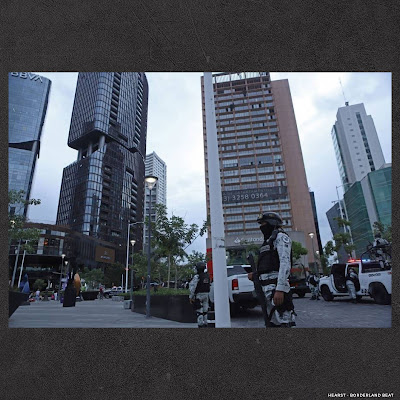 The prosecutor’s unwillingness to reveal the identity of the target suggests it was not a politician. The state’s governor reported hours after the incident that a criminal group caused the shooting, likely meaning the attackers were cartel hitmen.

Based on the location of the attack being Zapopan, it is likely that if the intended target was a cartel figure, then they were either a CJNG leadership figure (which could range from leading a small cell to a major faction) or another cartel leadership figure who is currently under CJNG protection. 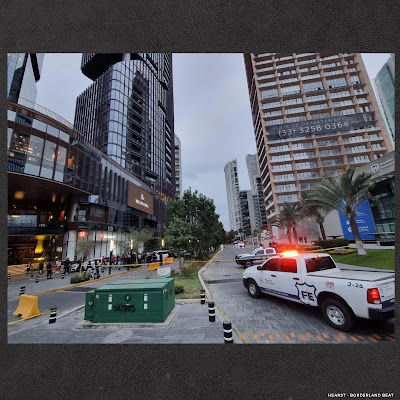 Currently, it is being reported that one bodyguard of the unnamed target was killed at the shopping plaza and another bodyguard was taken to the hospital for treatment. Four other people were reportedly injured in the attack, including innocent civilians who were shopping in stores nearby.

UPDATE 10:00 AM: President Lopez Obrador has commented in his morning press conference that the shootout was due to a group from Jalisco trying to kidnap a business man involved in buying and selling cars.

That being said, it's also worth noting that the singer Julión Álvarez, who is rumored to be one of the sons of a Milenio Cartel leader Armando Valencia, alias “El Maradon”, was alleged (by a person in a video clip) to have been present in the shopping mall and been the intended target of the attack. 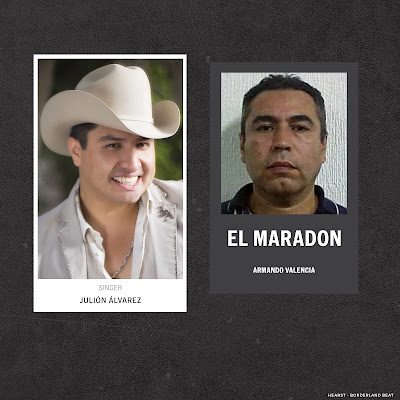 However Julión Álvarez has gone to social media to publicly deny that he was the target of the attack and says he was not even in the area at the time. The video appears to show him sitting inside a private plane, heading to a concert.

Outside of his alleged father’s identity, Julión Álvarez has also been linked to cartel involvement more directly when his assets were frozen in 2017 when the US financially tied him to cartel figure Raúl Flores Hernández, alias “El Tio”, who they were seeking to extradite at the time. In September 2020, his assets were unfrozen. 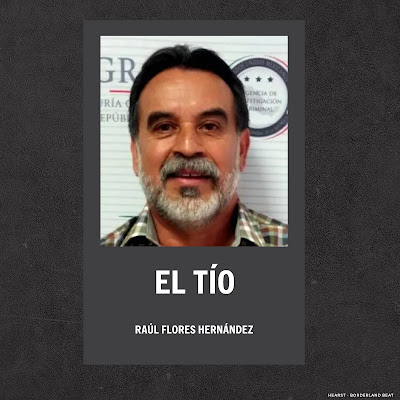 UPDATE 6:30 PM: The news site Notisistema is the first publication to give credence to the persistent rumors that the target of the attack was a businessman involved in a tequila company. They wrote:

“The armed men [...] had as their objective to deprive a businessman, unofficially identified as Rafael Fernández, of his freedom, sources from the State Attorney General's Office revealed to Notisistema. Although President López Obrador indicated in his morning conference that the businessman is dedicated to the purchase and sale of vehicles, sources consulted by Notisistema indicate that he is involved in the distribution of retail and wholesale alcoholic beverages. The name of the victim was revealed by the bodyguard who was injured and is currently being treated at the Military Hospital.”

So many videos of this shooting were shared on social media, with many showing overlapping moments within the battle from different angles. But the overall layout of the space and how close things were happening to each other can be hard to determine in the chaos of the footage.

So, let's try to piece together the videos of the incident in order to better understand what happened.

People inside a store located in the more interior part of the shopping mall take cover, while trying to determine if they should run or stay where they are. A hitman carrying a gun can be seen outside of the glass walls of the store. 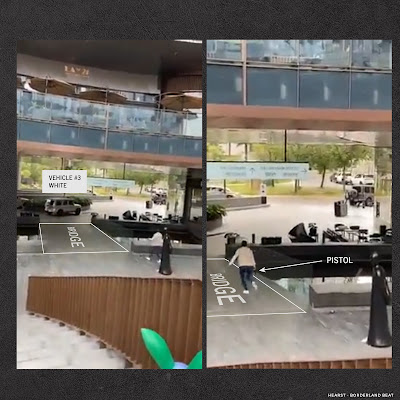 In a parking area drop off under the movie theater, a person holding a pistol waves their hand at the driver of a white SUV (henceforth called Vehicle #3). The vehicle stops to let them get inside.

Some have speculated online that Vehicle #3 is the one which contained the target of the attack. Whether the man with the pistol is the target himself, a friend of the target, or a bodyguard is unknown. Other sources have pointed to a different white vehicle being the one with the target inside.

As a side note, on the left side of the frame, a woman on the ground can be seen shielding her child with her body. 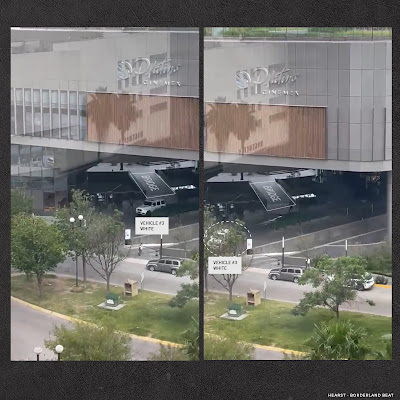 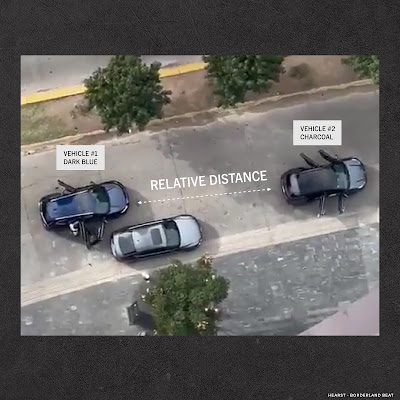 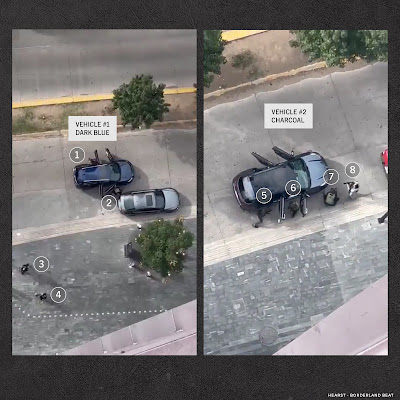 An overhead view of two SUVs being used by cartel hitmen. One, a dark blue SUV (henceforth called Vehicle #1) and another a dark charcoal or red colored SUV (Vehicle #2)

There are at least 8 hitmen visible. At the end of the clip, the blue SUV appears to back up and prepare to drive away.

It is a bit unclear if this group is the one which came to kill the target or if this is a group of bodyguards or reinforcements that work for the target. 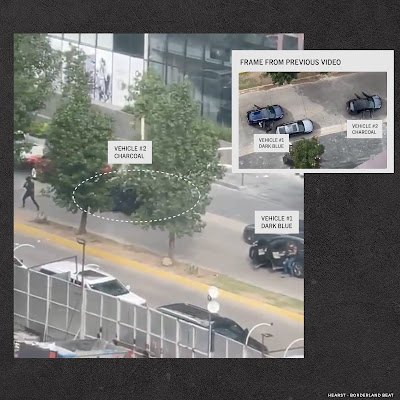 A different angle of the same two vehicles during roughly the same time, with the camera mainly focusing on Vehicle #1 while Vehicle #2 is largely obscured by a tree. 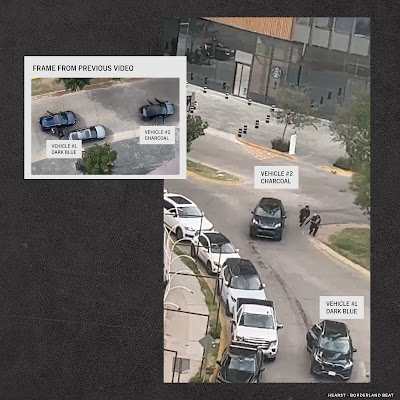 Above is a video that is filmed from quite a distance is able to connect some of the previous videos together, showing the moment when Vehicle #3 drives away from the area and then when both Vehicle #1 and Vehicle #2 follow after. 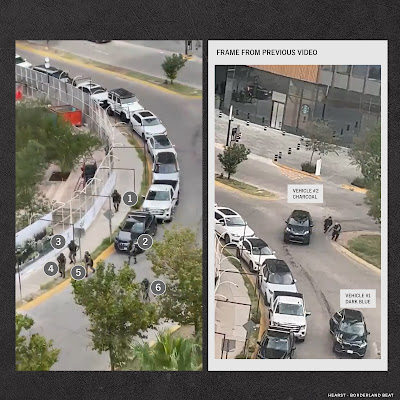 Later, six armed men, possibly military soldiers, approach a location, moving as a group down the same street seen in the previous video.

A wider view of The Landmark, where two military technicals can be seen on the right hand side of the frame.

There are videos of the aftermath of shooting at The Landmark, with broken glass on the ground and soldiers trying to take control of the scene. This is the video in which someone alleges that Julión was the target.

Video alleged to show a white sedan with a person injured in the shooting being brought for medical attention at a Guadalajara hospital that's very close by. Who this person is is currently unknown.

Later, trucks full of National Guard soldiers arrived at the location, as seen above. 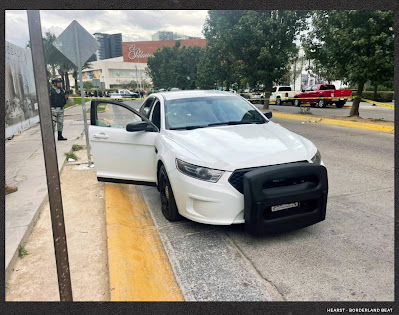 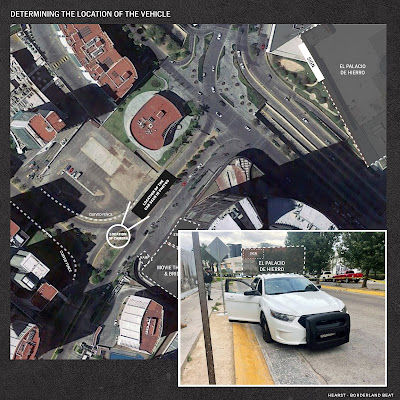 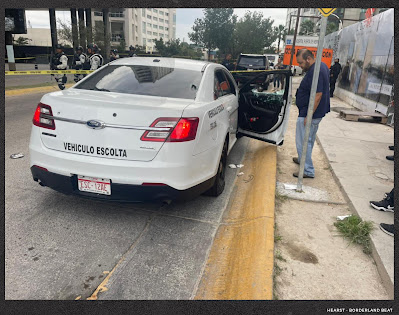 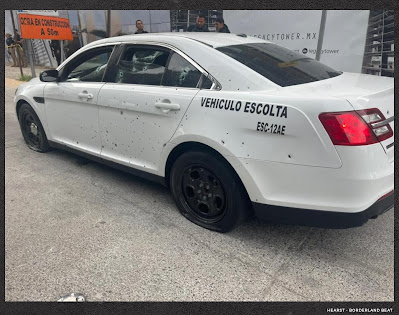 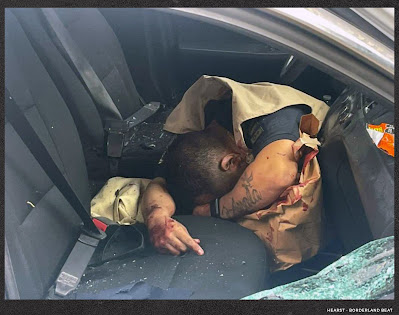 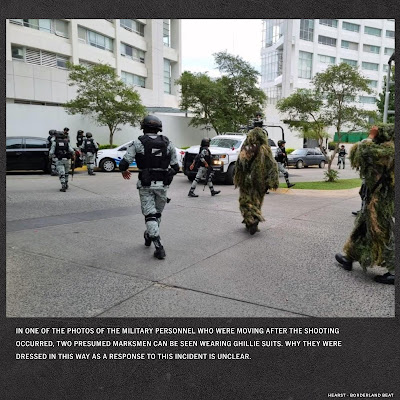 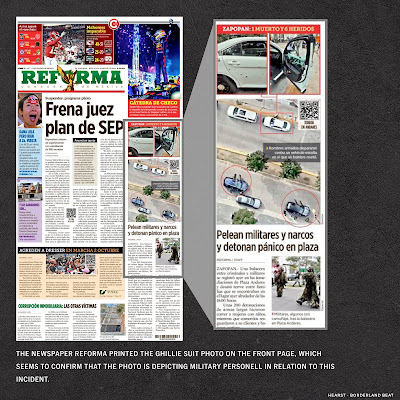