For the second time this month armed individuals believed to be from the Jalisco New Generation Cartel have released a video communique directed at Mexico’s president Andrés Manuel López Obrador (AMLO). The spokesperson narrates before the camera critical words against alleged corrupt military officers who apparently forfeited on their agreed upon illicit plan of action.
Broadcast #1 is a sanitized film that has been deemed safe for all to see consisting of their formal address to AMLO. While the last 14 seconds of film #2 gives everyone the true sense of their apple of discord with the dismembering of a male corpse. As the long machete swiftly swings down and bites deep into the man’s flesh. His body jerks violently on the ground.
A narco message was purposely plastered across the screen to offset the algorithms that would automatically violate the social media’s network rules for showing grotesque images.
Video translation is as follows:
Today is September 16, 2022. Good afternoon, Mr. President. With all due respect we address you. You made a change in this country. And all the states are grateful to you. This video sir is to clarify a matter. Innocent people never just die here. It’s the kidnappers, rapists, and extortionists who die.
We can’t deny the fact that there’s a mafia in this country as in China. Not everyone has the same mindset sir. Some individuals do things wrong. A case in point would be every peso that the generals and commanders of the military ask for. We won’t be giving out any names.
They’re the only ones who break their oaths. They believe that because of the uniform they wear they can kill innocents. And that nothing will happen to them. Sir, we’re going to repel the aggressions of the Army and National Guard. On account of the fact that large sums are paid to the commanders. They’re the ones who break our arrangements.
Ask them where the dead are. They just kill civilians or dispose of them. They claim that the orders come from above. If they want war, we’re ready! Our conflict is against all the bad actors, only them. We are a group that's positioned throughout this nation. And we’re determined to sacrifice our lives for the townspeople.
Warning: Graphic Video 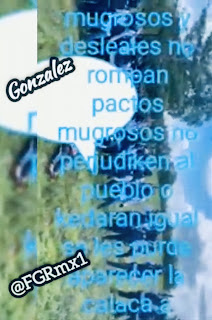 Narco message reads as follows:
You filthy disloyal culprits shouldn’t break you oaths. Nor should you scumbags harm the citizens. Otherwise, the same fate could await you. Death could also appear for you.
Fantasma
Sol Prendido Posted at 9/29/2022 06:46:00 PM
Share