So, Why Did The CJNG Burn Baja Over the Weekend? And Who Are Los Erres? 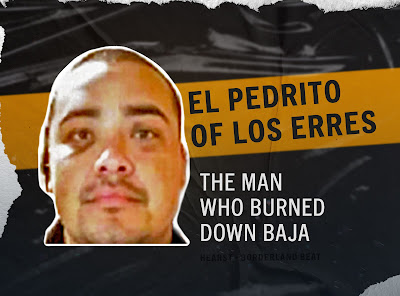 Over the weekend, a number of narco blockades in the border cities of Tijuana and Mexicali appeared in the state of Baja California, as covered previously by Ivan in posts on Friday, Saturday, and Sunday. Then we heard that a man with the alias “El Puma” was allegedly being named as the organizer of these narco blockades.

What you may not realize is that this “El Puma” has played an important role in the Tijuana cartel world since all the way back in 2006, starting as a trusted direct report and protégé of Teodoro Garcia Simental, alias "El Teo", when he was still with the Cartel Arellano Felix (CAF).

Who Organized the Blockades in Baja?

The Tijuana based weekly magazine Zeta alleged the organizer of blockades was Javier Adrián Beltrán Cabrera, an established cartel leadership figure in Tijuana who currently leads the group Los Erres. 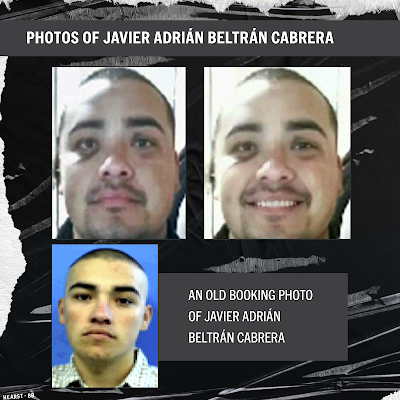 They wrote the following in an article released on Saturday, August 13:

“Javier Adrián Beltrán Cabrera, is the first suspect of having organized and ordered the narco-blockades in Baja California on Friday, August 12, according to the indications received by the intelligence areas of the corporations integrated to the Coordination Table for Peace and Security.

Beltran Cabrera ‘El Javi’, ‘El Pedrito’, ‘El Pit’ and/or ‘El Puma’, was imprisoned in 2011 for gun possession and was released. He is listed as the ringleader of the criminal cell identified as Los Erres who have served as hitmen for the CAF, from Sinaloa this 2022 allied with the CJNG.

El Puma was already being investigated as the mastermind of the multiple homicides committed in July and August in the eastern zone of Tijuana, the murder of FGE agent Hermes García Santoyo, the threats through narcomantas against Governor Marina Ávila and prosecutor Ricardo Carpio in March, and the videos published on CJNG social networks. There is currently no arrest warrant against him.”

Zeta choosing to call Javier Adrián Beltrán Cabrera by the alias “El Puma” (instead of picking any of his other aliases) created a bit of confusion because he’s got a half brother, who also works for the CJNG in Tijuana, named Isaac Alhiu Chávez Cabrera, whose primary alias is “El Puma”. 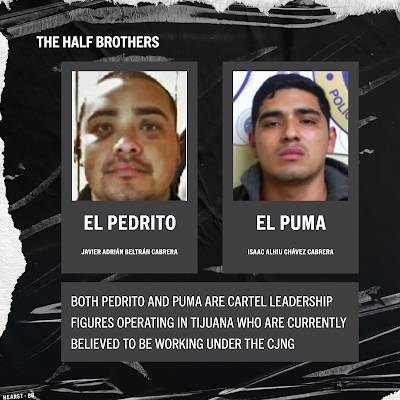 Javier Adrián Beltrán Cabrera and Isaac Alhiu Chávez Cabrera are half brothers, related through their mother. Both have El Puma as one of their aliases however its Isaac who is primarily called “El Puma” whereas Javier is more often known as “El Pedrito”.

For the sake of clarity, Javier Adrián Beltrán Cabrera will be referred to only as El Pedrito for the rest of this story. 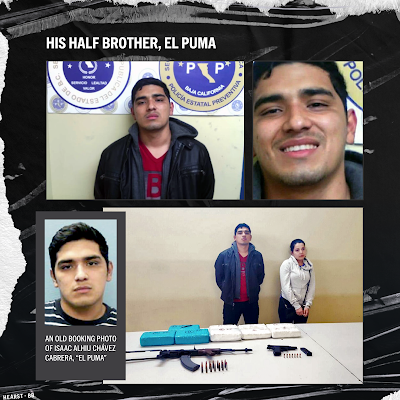 Zeta goes on to explore the potential motive behind the attack, writing:

“In regard to the fires and blockades, ZETA was informed that the official stance of the authorities on the Security Round Table was that this violence is not exclusive or particular to the conditions of Baja California, because these same acts were also carried out on August 11 in Ciudad Juárez, Chihuahua, and on August 9 in the states of Baja California and the state of Mexico, and on August 9 in the states of Jalisco and Guanajuato.

They occurred when Roberto Ruiz Velazco ‘El Doble R’ and Gerardo González Ramírez ‘El Apá’, capos of the Jalisco Cartel - New Generation (CJNG), escaped from an operation led by elements of the Secretary of National Defense (SEDENA), to arrest them, in Guadalajara.”

Zeta seems to be saying that the official stance of authorities is that the road blockades in Baja California were not due to any local incident but instead were ordered from CJNG higher-ups at a National level. However, the wording is a bit unclear, leaving open the possibility that the authorities were merely trying to underplay the violence seen in Baja by comparing it to the violence in other states.

What do we know about El Pedrito & Los Erres? 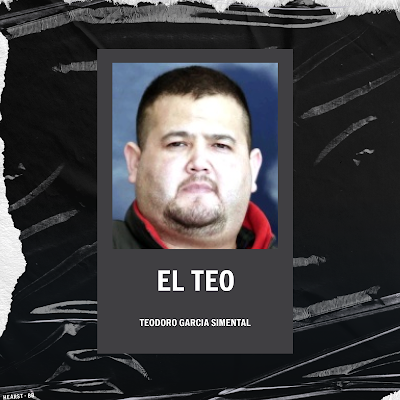 In 2006, Teo asked R4 to form a group of hitmen that would manage the drug sales and human smugglers within his CAF territories in the Zona Norte region of the city.

El R4 subsequently founded the group Los Erres which he went on to lead for many years and his brother Pedrito became his right hand man, with El Puma also helping to manage the group. At various points within Los Erres history, Pedrito was actually the one named in articles as the leader of Los Erres, not El R4, which may suggest the brothers shared power equally, although sources are unclear on this point. 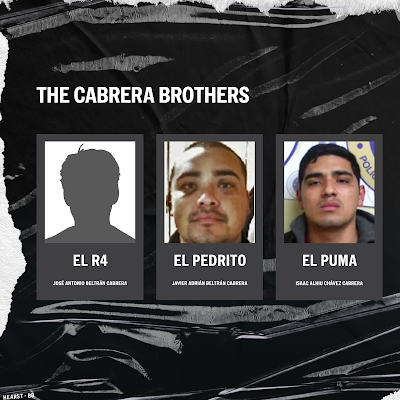 The group was named Los Erres, which translates as The Rs, due to the double Rs within their last name Cabrera.

In 2008, Eduardo Arellano Felix was arrested and El Tio entered into a violent power struggle against Luis Fernando Arellano over who would take over leading the CAF. Eventually, El Teo split from CAF, taking Los Erres along with him, and he started his own group which was supported by the Sinaloa Cartel. 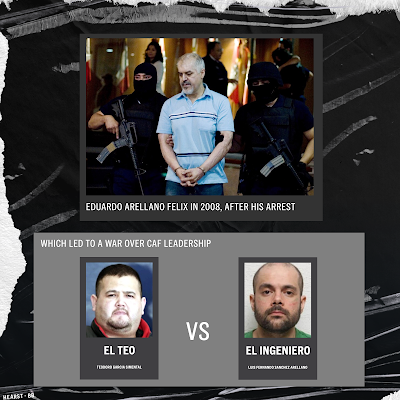 El Tigre utilized Los Erres as an armed wing in his war against Alfonso Lira Sotelo, alias “El Atlante”, who should have in theory been their ally since he was also under the Sinaloa Cartel however CDS was going through a period of infighting. 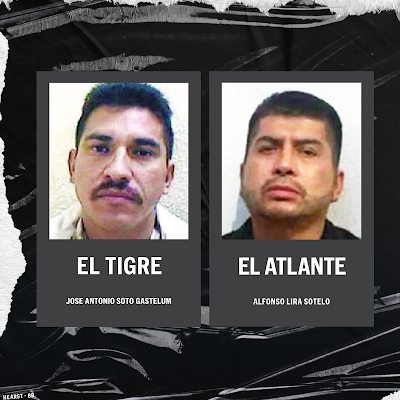 During this period, Los Erres and El Tigre were allies of Alfonso Arzate García, alias "El Aquiles", and his brother Rene Arzate Garcia, alias “La Rana”, all united by their mutual fight against El Atlante.

At one point in 2010, there was a large arrest of Los Erres members and in 2011, Pedrito was arrested for firearms possession and sent to a prison for a short sentence. This caused the group to reshuffle. El Tigre moved to Mexicali, whereas the Cabrera brothers - El R4, El Pedrito and El Puma - temporarily moved to San Diego, remotely giving out orders to Erres members in Mexicali. 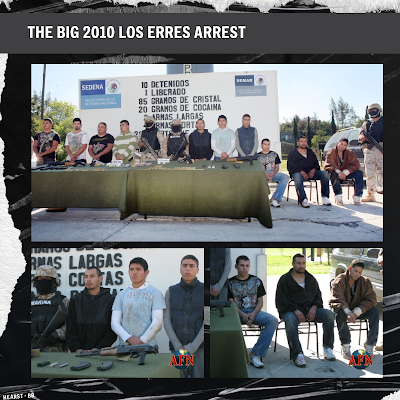 On May 11, 2013, El R4 was killed while entering a safe house located in the Residencial Sevilla de Mexicali subdivision. It is largely presumed he was killed by an associate of El Atlante, making him a casualty of the larger war in Tijuana. However there are rumors online that in the last few years, El R4 had become badly drug addicted and paranoid. When he called some of his direct reports for a meeting, they feared he was planning on having them executed so they preemptively killed him - before he got the chance to do the same to them. 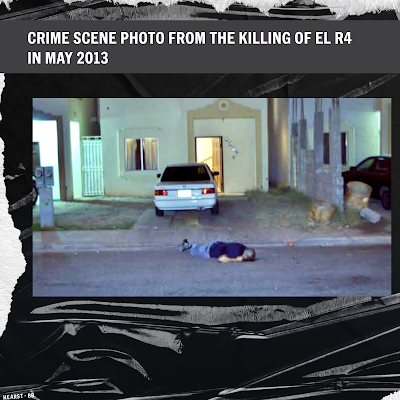 Following his brother’s death, El Pedrito became the new leader of Los Erres and he temporarily assumed the alias “El R4”, the former mantle of his brother, but over time that alias gave way to the more commonly used “El Pedrito”. Pedrito’s half brother El Puma allegedly continued to be involved in leading Los Erres. Around the year 2014, Los Erres left Mexicali and returned to Tijuana, still working under El Tigre.

In 2015, El Puma was arrested for firearm possession, he served time in El Hongo prison and was later released. 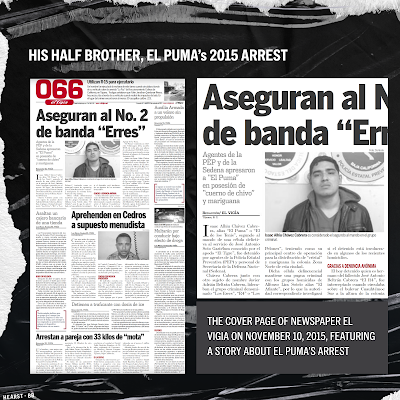 In 2018, Los Erres were still identified by Zeta magazine as working under the Sinaloa Cartel, under El Tigre but by around 2020 to 2021, they allegedly began working under the Cartel Jalisco Nueva Generación instead. 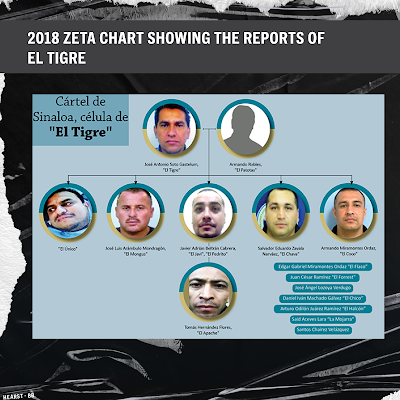 So who do Los Erres report under within the CJNG?

On August 15, 2022, Zeta released a new article in which they described Sinaloa Cartel group’s main opponent in a certain region of Tijuana as: 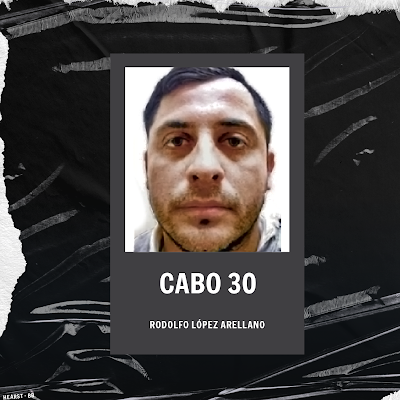 To read the full criminal history of Cabo 30, please see this previous story.