As reported by "El Huaso" for Borderland Beat, CJNG burned stores, and vehicles creating blockades after a military operation against high-ranking leaders took place. Now more details have emerged about the operation and aftermath of the violence in Jalisco and Guanajuato.
Regional leaders of the Jalisco Nueva Generación Cartel (CJNG) that allegedly met on Tuesday intended to record a video with a large group of its members. Until they were surprised by federal authorities, Upon being identified, the criminal leaders clashed with the military in Ixtlahuacán del Río, north of the Guadalajara Metropolitan Area.
The meeting took place at a ranch located on the border between Cuquío and Ixtlahuacán del Río, government sources reported. However, personnel from the Ministry of National Defense found out. With the recording, the sources believe, they wanted to spread a message that characterizes the CJNG and that has already been made public on other occasions, in which its members appear heavily armed.
When they found out, the troops organized an inspection operation, without making it known to the local authorities, and they went to the area suspected. The suspicions turned out to be true, later confirmed by a flyover of the area; then came the confrontation with the Army that led to the attacks in Zapopan.
Cresencio Sandoval explained that reports of the presence of vans with armed people in Ixtlahuacán had reached the military and when elements of the Army arrived in the area to corroborate, various confrontations occurred. Due to a large number of criminals, the armed forces requested reinforcements, more soldiers and a National Guard helicopter arrived, who repelled the attacks, resulting in a deceased alleged criminal. 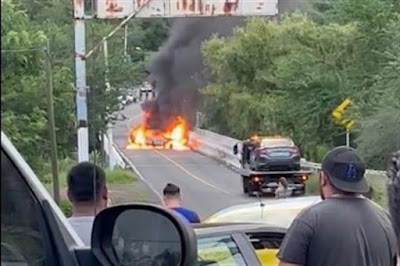 The criminals and other members of the CJNG then carried out six blockades in the Guadalajara metropolitan area with a balance of 14 cars and a business set on fire with 5 arrests. Meanwhile, in Guanajuato, 11 detainees were reported, 6 blockades and 29 businesses burned, including 25 Oxxo stores.
The Prosecutor's Office and the Security Secretariat of Jalisco reported that the drug attacks resulted in a woman and a worker killed, while a hit man was killed.
President Andrés Manuel López Obrador announced that the Secretary of National Defense (Sedena) informed him that the violent acts in Jalisco were due to the presence of armed people in the Ixtlahuacán del Río area: it was a meeting of Ricardo Ruiz Velasco, alias El Doble R with another member of organized crime, identified as Gerardo González Ramírez, alias El Apá.
The head of Sedena, Luis Cresencio Sandoval, indicated that neither Ruiz Velasco nor González Ramírez were among the 16 people detained for the events of Tuesday, in addition to the fact that their names do not appear in the National Detention Registry System (RND). 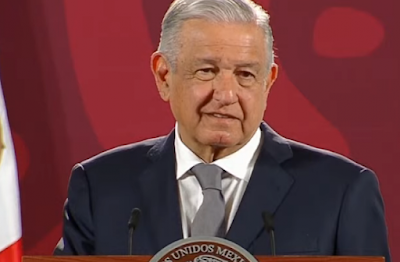 There are already detainees in both Jalisco and Guanajuato, of those who were at the meeting.
Apparently, yes, group leaders, because there was that very strong reaction, and the burning of vehicles and I think that of Oxxos.
Also continuing with the theme of the event that arose from Ixtlahuacán, in Jalisco, this also had a collateral impact in Guanajuato, in different municipalities: in Celaya, in San Francisco del Rincón, Silao, Irapuato and León.
And that same day 11 people were arrested and made available to the Public Ministry, who were driving in vehicles and motorcycles, who possessed weapons, magazines, and bullets, and they were also assured of gasoline bottles, with which they perpetrated the fires in these places.
There are already 11 detainees who, added to the five from Jalisco, imply that 16 people were detained for these events to date, who are already at the disposal of the corresponding Public Ministry.

Ricardo Ruiz Velasco, alias El Doble R, who also goes by the alias El Tripa, is a lieutenant of the Jalisco New Generation Cartel (CJNG) and, according to Sedena, worked under the command of Juan Carlos González, El 03, founder of the Grupo Elite of the CJNG.
Ricardo Ruiz Velasco began his criminal career in Michoacán and later had a presence in Guanajuato and Zacatecas. His appearance in propagandistic videos for the CJNG cartel has earned him several narco corridos that tell part of his criminal history.

It is presumed that "El Mencho's YouTuber" has been allegedly responsible for at least 100 homicides perpetrated in various states of the country, according to intelligence reports. And it is among his victims are minors, government officials, models, and rival hitmen.
One of the most notorious cases was his alleged participation in the murder of the then Secretary of Tourism of Jalisco, José de Jesús Gallegos Álvarez, reported in March 2013, when he was on his way home on Acueducto Avenue but was intercepted by a group of assassins, who killed him.
Another of his fatal victims would have been the young Juan Luis Lagunas Rosales, better known as "El Pirata de Cuiliacán", who had gained fame on social networks for vlogging his participation in the world of drug trafficking. He was filmed insulting one of the most wanted drug lords in Mexico: Nemesio Oseguera Cervantes, alias El Mencho. The death of the 17-year-old was reported in December 2017 in a bar in Zapopan, Jalisco, at the hands of an armed commando. El Doble R is investigated for this murder.

Local media reported that Ruiz Velasco had been arrested in Aguascalientes in December 2014 by elements of the State Police, he had nine arrest warrants against him. However, hours later he was released.

Less is known about Gerardo González Ramírez, alias "El Gera", "El Güero" or "El Apa". In May, 20222 the Attorney General's Office offers a reward of 500,000 pesos to anyone who provides information on the alleged leader of the Jalisco New Generation Cartel within the limits of Zacatecas and Jalisco. 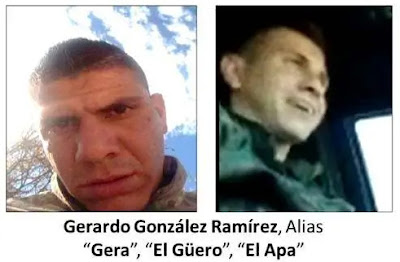 The reward released by the FGR details that this subject is likely responsible for criminal acts in the municipalities of Nochistlán, Apulco, and Jalpa Zacatecas, as well as in Yahualica de González Gallo in the state of Jalisco.

El Gera/El Apa leads a group of assassins who have caused terror in various communities, stripping people of their homes, and causing hundreds of families to flee leaving everything behind. He is also attributed to kidnappings and homicides, in addition to being identified as the leader of the criminal cell that has clashed on several occasions with rival groups and federal forces.

Shortly after the initial confrontation, various members of organized crime set fire to vehicles and set up narco blockades in the outskirts of Zapopan, more than 50 kilometers from Ixtlahuacán: vehicles were burned in the San Isidro, Mesa Colorada, and Paso de Guadalupe neighborhoods, located on the highway to Saltillo, at the entrance to the Metropolitan Area of ​​Guadalajara, as well as on the Camino a Valle de San Isidro.
The narco blockades covered the area near San Francisco de Ixcatán and El Tempisque. There, armed men stripped several drivers of their vehicles and set them on fire, in order to prevent the security forces from approaching Zapopan, where several leaders of the CJNG live showing that the protection covered more than 50 kilometers in that region.
In total, they burned 19 vehicles, including four trucks, and a self-service store. They also threw nails and "punch tires" to prevent traffic. At the scene of the arrests, a "narco monster" was seized - a modified van armored by hand - in addition to nine other vehicles, some 30 long weapons, machine guns, and explosives. Two civilians were killed during the attacks.

Simultaneously, Guanajuato began to burn. At 8:30 at night, authorities received a report that an Oxxo in Celaya, almost 300 kilometers away, had been attacked with Molotov cocktails. According to witnesses, shots had been heard and, shortly after, an explosion.

A video recorded by the assailants themselves shows several armed individuals, wearing camouflage clothing, hats, and tactical vests, entering one of those stores while the screams of a child are heard. They ordered civilians out of the OXXO while firing warning shots and shouting their allegiance to 'El Mencho', the leader of the CJNG.
According to the company FEMSA, owner of the OXXO convenience stores, 25 stores in that state were set on fire in whole or in part, 20 of them in Irapuato, 300 kilometers east of the site of the initial operation. More than 40 attacks were recorded, 90% of which targeted Oxxo. In Irapuato, where there were 11 detainees, some of them simply stated that they had been ordered to do so.

Guanajuato-based security analyst David Saucedo said the Oxxo stores were apparently chosen because of their ubiquity and light security, rather than because of any dispute with the company. Cartels often create such chaos in an effort to keep authorities from transporting captured cartel bosses or to protest arrests.

Five were detained in Jalisco and 11 were detained in Guanajuato, linked to the fires. 2 deaths were reported in Jalisco. Several educational institutions, both public and private, decided to suspend classes the following day to avoid more violent acts. The United States consulate in Guadalajara issued a security alert on Tuesday night for its citizens to stay safe and follow the recommendations of the authorities. The order was rescinded the following day.
Federal sources confirmed that El RR is not among the detainees. And there were no important arrests.
Sources APNews, Mexico GOB, Mexico GOB, Infobae, Infobae, Zeta Tijuana, Reforma, El Universal, Dominio Publico, Riodoce, Borderland Beat, Borderland Beat, USA Today
Graphic by HEARST
Socalj Posted at 8/12/2022 03:07:00 AM
Share