The banners were left on at least five different bridges around the city, on 2 De Abril, De Gaspar De Almanza, Avenida Tecnologico, Enecuilco, and on De La Pepsi.

The same banner design, with different text, has been used by CJNG Grupo Elite several times before in the state. 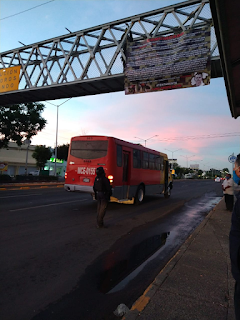 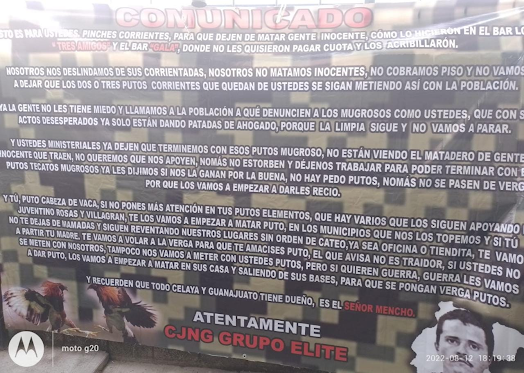 The message accuses rivals of being behind two mass shootings this year in Celaya, the August 6 mass shooting at Bar Tres Amigos, which left 10 dead, and the May 23 shooting at Hotel and Bar Gala, which left 11 dead, as reported by Borderland Beat. A narco message signed by CSRL found at the scene of the May 23 attack blamed the victims for supporting CJNG.

The message also accuses local investigative police of colluding with rivals the CSRL, and once again alleges that they operate without search warrants, a complaint the CJNG made before at the July 28 IED attack in Irapuato, as reported by Borderland Beat.

These messages were displayed just four days after CJNG paralyzed the state with coordinated attacks across 9 cities in effort to disrupt a law enforcement operation against their leaders, an action that generated nationwide outcry and statewide panic.

This banner design, with a military green camo background, with the face of 'Mencho', and two roosters fighting has been used by CJNG Grupo Elite several times with the text altered over last two years in Guanajuato. This is one more evidence of CJNG's high level propaganda production capabilities relative to their competition.

There were over 100 narco messages found in Guanajuato in 2021. The CJNG left almost 60, more than any other group in the state, a reflection of their obsession with the region and the intense propaganda campaign they run.

Celaya was the city in Guanajuato with most narco messages in 2021, with 51, according to the Borderland Beat narco message database of 2021.