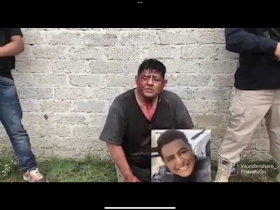 A captured Federal Municipal Policeman narrates for the camera his illicit involvement with the Jalisco New Generation Cartel within the city of Celaya.

Insight into the inner workings of corrupt policemen in the pockets of organized crime is given by the enslaved and bloodied captive.

Assassins for the Santa Rosa de Lima Cartel record his words on film to expose their degenerate adversaries.

Captive: I’m a FEDEPAL (Federal Municipal Police). I work for the Fedepales. I hand over the rent to the Secretary and Director. They’re the ones who open the way for the patrol vehicles to pass through. I know that they’re the individuals who hanged the 4 letters cartel narco messages several days ago.

Interrogator: How exactly are you involved?

Captive: I work for them. We move the patrol vehicles so that others can come through easily.

Interrogator: Who charges the extortion for the faggot Fedepales you fool?

Captive:  I’m the one who charges.

Interrogator: And who do you hand that money over to?

Captive: I give it to the Secretary and Director.

Interrogator: How much do you give them a month?

Captive: About a million pesos.

Interrogator: Is that per month or biweekly?

Captive: It was us who released the Jalisco gunmen that were driving a red Camaro here recently. We’re the ones who open the road whenever they raid the targeted homes. Our armaments are used in these affairs. We sell the drugs, the cocaine. We look to find who sells it.  So, that we can hand it over to the Secretary. We’re the ones who decide which houses will be raided.

Interrogator: What all do you seize?

Captive: The firearms, drugs, and we hand it all over to the Jalisco gunmen.

* The fate of this man ended with him being dismembered and scattered across town off camera afterwards.