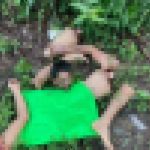 The Operativa Bélica aka Bloodthirsty Operatives, an armed criminal cell who hasn’t wandered too far out of our peripheral vision here at Borderland Beat. Has once again made their appearance online.

Several assassins from the armed wing of the Jalisco New Generation Cartel (CJNG). Have recorded the interrogation of an individual believed to be Dorian Ulises Vivar Ortega, a local from the town of Tamazunchale.

Within this broadcast Vivar Ortega narrates before the camera his illicit involvement. As well as that of government personnel with the Cartel del Golfo (CDG) in and around the towns of Cuayahual, Matlapa, and Axtla de Terrazas.

The following video has been deemed safe for all to see. In addition the captive was dismembered off camera after his questioning.  A narco message was left on his corpse with a warning. 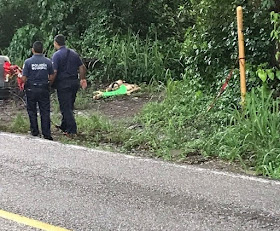 Sicario #1: So, they’re coming from the towns of Cuayahual and Matlapa?

Sicario #1: And where in Matlapa are they roaming about.

Captive: Well, they’re just roaming about here and there throughout Matlapa.

Sicario #2: Who within the government is giving these guys support?

Captive: Are you asking about the Matlapa government personnel?

Sicario #1: I’d like to know who all is involved within the towns of Matlapa, Axtla (Axtla de Terrazas), and Cuayahual.

Sicario #1: Who exactly is this person?

Captive: I don’t know but he’s there right now…

Captive: I put his name down as Poli Avenida. I don’t really know his actual name. Nor do I have any contact with him. And those names I stored for him was due to them asking about me earlier there at that store with Coco.

Sicario #2: Who all from the Metropolitan Police is working alongside them? 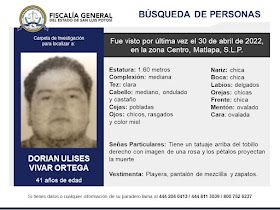 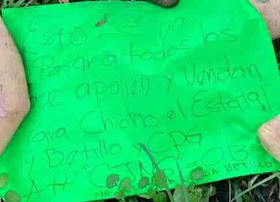 This will be the fate of everyone who supports or sells for State Policeman Chicho, Betillo, and the Cartel del Golfo (CDG). Sincerely, CJNG Operativa Bélica. Betillo you can suck my dick