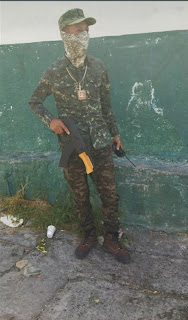 On Thursday June 23, PRI representative Perla Villarreal Valdez announced that a group of heavily armed men stole 10,000 liters of drinking water that was destined for the Colonia Independencia neighborhood in the south of Monterrey, Nuevo Leon. The state of Nuevo Leon is currently suffering from an extreme water shortage due to a severe drought that began in early June 2022.

Valdez claims that she rented the water tanker to deliver the 10,000 liters of water to fill a community water tank in the struggling community. She also claims that she notified local police so they could aid the safe delivery. However, the water delivery was met by the armed group, who ordered that they would decide the waters destination.

One photo of the event shows one of the hijackers dressed in a camouflage shirt, armed with an AK-47.

The water situation in the state is dire. According to Informador, three dams, called El Cuchillo, La Boca, and Cerro Prieto, provide a combined 62% of Monterrey’s water. However, two of the three main dams which supply the region are at critically low levels, La Boca at 8.22%, and Cerro Prieto at 2.06% capacity. El Cuchillo is operating at 45.45% capacity.