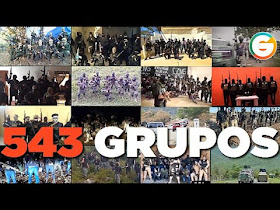 At least 543 armed groups emerged between 2009 and 2020, making up the criminal geography of Mexico. From this magnitude a problem of insecurity exists in Mexico related to the activities of organized crime. Thus, there is a study carried out by the Crisis Group organization that classifies these gangs into criminal, self-defense, and politically inclined organizations. These criminal cells vary in size and scope.

At least 202 operate as scions of larger criminal organizations. Like the Sinaloa Cartel whose criminal organization, according to the study, is the one with the largest number of armed groups. The study reveals that 107 of these groups originated as a result of the fragmentation of cartels. For example Los Zetas that in 2010 controlled from Tamaulipas to Guatemala and now exist as independent organizations being the Cartel del Noreste and Los Zetas Vieja Escuela. In addition to other criminal cells.

Around 87 criminal groups were allied with criminal organizations for a short time and in hundreds of regions of the country. The study classifies 10 criminal organizations as the grouping of several under one name. Among them the United Cartels that fight against the Jalisco New Generation Cartel in Michoacán. Some are relatively large organizations dedicated to international drug trafficking and identified by United States authorities.

Others, the vast majority, are much smaller cells. Sometimes constantly imperfectly aligned with larger groups operating in unstable alliances with other small gangs. Fragmentation has been accompanied by a growing diversification of criminal income. Many of these groups do not participate in drug trafficking but in a multiplicity of predatory activities. Such as kidnapping, extortion, and fuel theft, among others.

A map made by Crisis Group indicates that the states of Sonora, Chihuahua, Michoacán, Guerrero and Tamaulipas are the regions with the highest criminal presence. In comparison with the entities of Baja California Sur, Yucatan, Campeche, Tabasco, Tlaxclan, and Nayarit, where one to three criminal cells have been established. Another piece of information offered is where the criminal groups are most concentrated. Contrary to what was believed, Mexico City is the region with the most criminal cells.

According to investigations in Mexico City there are 51 criminal groups involved in the crimes of robbery and extortion. Or in the local market of illicit substances. The states with the fewest criminal cells are Aguascalientes, Baja California Sur, Hidalgo, Nayarit, Querétaro, Tabasco, Chiapas, and Tlaxcala.