But these documents are not the ones that President Andrés Manuel López Obrador had promised to make transparent, who originally indicated that military statements would be made public, tested by the Attorney General's Office (FGR). It is a couple of pages, supposed telephone messages, in which the release and delivery to the crime of the young people is indicated, as well as another document in which search operations by the authorities are detailed. 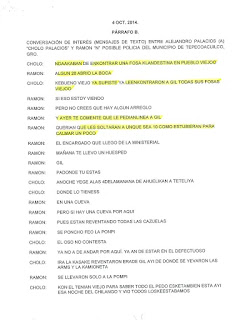 According to reference sheet No. 14-04885, a conversation is detailed between someone named as Ignacio (trusted people of Felipe Flores Vázquez, Secretary of Public Security in Iguala, Guerrero) with Gildardo López Astudillo, El Gil, regional chief from Guerreros Unidos.

At first instance, it is inferred that the agent doubts the identity of the students and presumes that they are from the normal rural Raúl Isidro Burgos de Ayotzinapa, but he distrusts them because he assures that they are armed and hooded. He adds that several have been arrested.

"PASS ME ON THE ROAD TO PUEBLO VIEJO I WILL RECEIVE THEM. DICK LET THEM I HAVE SOME BEDS TO LAND THEM PASS ME THE DETAINED ( sic )," requested the alleged criminal leader.

Ignacio reported that they were 21 people, who were traveling in a bus and asked that they be attentive at some point on the night of September 26, since the messages do not indicate the delivery time.

"WHEN THE BEDS PUT ON BATTERIES. THE DED OF THE AUTOBIUSPAQ ARE ALREADY BROKEN BY YOU (sic) ", said the alleged official

But later he added that 17 more were in "the cave," and suggested turning over that group and not reporting any arrests under his command. El Gil agreed to receive them all, but of the first, 17 would be sent to the "Wolf Gap". This would mean that at least 38 students were in the hands of the local police at different points. But it is not clarified, with the pages revealed by Segob, the whereabouts, and arrest of five more young people.

"TELL THE FAT K, THEY ARE STOPPED, MORE BUSES ARE COMING ( sic )," Ignacio warned. "I DON'T HAVE ANY OLD DETAINEE ALL THE PACKAGES WERE DELIVERED OLD ( sic )", he concluded.

El Gil ordered not to report seizures and the police confirmed that he did so before the Secretary of Security, Felipe Flores Vázquez. On the second page, messages were indicated between Alejandro Palacios, El Cholo, and Ramón, an alleged police officer from Tepecoacuilco. In the conversation, the alleged criminal commented that a clandestine grave was found in Pueblo Viejo, but this would have been because someone revealed the location.

In addition, all the clandestine burial points of the Gil have been located and they presumed some agreement. Supposedly, a ministerial agent requested the capo's cooperation to deliver 10 bodies and calm the situation. By then, eight days had elapsed since the events.

Later, the officer revealed that he would transfer Gil to "a cave" located in the domain of Cholo Palacios since a search had been unleashed in "las cazuelas", which is presumed to be the safe houses of Guerreros Unidos. In one of them, they would have captured the Ponpi and/or Pompi. Another subject identified as the Bear, the subjects point out, would have fled to Mexico City.

"THEY TOOK THE PONPI ONLY," said Ramón.

"THE OLD MAN HAD TO KNOW EVERYTHING, ESKET ALSO IS AYI THAT NIGHT IN CHILANGO AND HE SAW ALL OF THE KEESTABAMOS", Cholo Palacios replied.

According to Alejandro Encinas, president of the Presidential Commission of the Ayotzinapa Case, from the beginning of 2019 to date, 40 members of the Armed Forces of various degrees have appeared and Infantry Captain José Martínez Crespo, attached to the 27th, is in a military prison. Battalion in Iguala.

On Thursday, López Obrador said that the testimonies of the military that were crossed out in the file by the FGR would be revealed. There would be at least 239 sheets with information about what happened the night and early morning of September 26 and 27, 2014.

“Let Alejandro Encinas deliver them because we have nothing to hide. He who owes nothing fears nothing and what we are looking for is to know where the young people are, that is our commitment to parents,” the President promised.

But on the morning of October 1, the president corrected his position and commented that there was a misinterpretation. Although he hinted that he would seek to reveal the data hidden by the FGR, he mentioned that in the meantime some pages provided by the Secretariat of National Defense (Sedena) would be public.

"I said that we were going to deliver the documents that have been because the Ministry of Defense is making available to the investigation, not the previous ones because they were confused if they delivered them tested before because we are going to look for the originals to deliver them well, but the that we have now, today Alejandro is going to make them known, today,” he mentioned in his morning conference this Friday.

On September 24, the FGR and Segob assured that they have recovered more than 31,338 documents from various agencies of the federal government; the Sedena contributed 17 thousand 45, which add up to the majority of the files. These pages, photos, reports, and analyzes were not integrated into the preliminary inquiries and are now a key piece to clarify the whereabouts of the normalistas.