A Sinaloa Cartel operative was indicted by the United States Department of Justice (DOJ) for organizing a network of drug traffickers who smuggled large quantities of narcotics from Mexico to the US state of Alaska.

The recent DOJ statement and articles detailing the operation offer interesting insight into how logistically a major cartel such as Sinaloa manages to supply drug markets even in very geographically isolated locations, such as Alaska.

On September 15, 2021, the US DOJ announced in a statement  that Miguel Báez Guevara had been indicted by a federal grand jury on 17 counts related to his leadership role in trafficking narcotics directly from Mexico. Báez Guevara was believed to be organizing this drug route for the Sinaloa Cartel, which he actively and openly claims membership in.

Beginning as far back as 2016, but likely even earlier, Báez Guevara allegedly worked to import heroin, methamphetamine, and cocaine directly from Mexico to the US state of Alaska, which was a highly valued market worth far more than other US states. Far more profit could be reaped per kilo in Alaska due to its geographic isolation from both common drug producing countries (such as Mexico, Columbia) and common drug distribution locations (such as the cities of Atlanta, Chicago, and San Diego).

Using social media websites and encrypted messaging apps, Báez Guevara’s network contacted female drug couriers within the state of Alaska. According to KTOO, a non-profit Alaska-based news service, Báez Guevara’s group would book these drug couriers flights from Alaska to Arizona and then arrange for the woman to travel from Arizona into Mexico.

Once in Mexico, the women would pick up a drug shipment and then smuggle their package back into Arizona. After a few days' wait in Arizona, the women and their shipment would fly back to Alaska. The local Alaskan couriers often traveled together in small teams. Each courier typically carried about 250 grams of narcotics on each trip.

Once the couriers arrived back in Alaska, a member of Báez Guevara’s network who lived in Alaska paid them for the job and collected the narcotics from their person, usually after they’d gone through the airport screening. The drugs were generally brought to the cities of Anchorage, Fairbanks or Juneau. 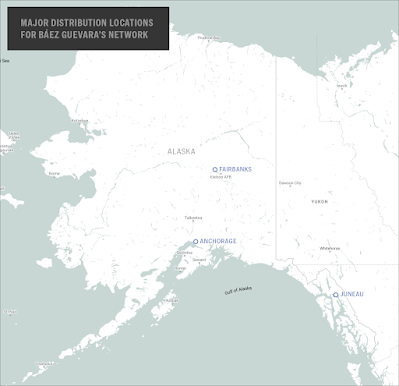 Báez Guevara then worked with local street level dealers in Alaska to negotiate a price and once a price was settled on, the man he had living in Alaska (who had collected the shipments from the couriers) would supply the agreed upon amount to the local dealer. The local dealers would pay Guevara with prepaid debit cards or money wired to accounts in Mexico. Sometimes they would actually ship physical cash back to Mexico.

Báez Guevara ran his enterprise like a traditional business in some ways, as potential drug couriers were required to submit photos of their driver’s license and other personal information for his review before they were allowed to begin doing business for him. He also assigned a team leader to each smuggling team, providing a structure to help manage the endeavor.

The DOJ’s investigation found that Báez Guevara often made it known to potential couriers that he was associated with the Sinaloa Cartel, implying that as such there were serious and violent repercussions for any couriers who dared to steal narcotics or who provided information to law enforcement. Anchorage Daily News writes that Guevara made threats to the people he recruited and their families when drugs or money went missing during their trips.

Báez Guevara lived in Mexico throughout this entire business endeavor. He never once stepped foot in Alaska, nor even the continental US during this time; this despite him actually being a US citizen. Báez Guevara was cautious and he knew he had outstanding federal and state arrest warrants in the United States, so he chose to orchestrate the endeavor safely from within Mexico.

United States authorities allegedly first took note of Báez Guevara‘s drug trafficking operation due to a relatively small seizure of methamphetamine on a state ferry in 2016. Authorities began an investigation called “Operation Albondiga” which slowly began taking out low level operators involved by as early as 2016-2017.

In the full list of 23 individuals who were arrested and brought up on criminal charges as part of Operation Albondiga, all were said to have pled guilty, making it likely that at least some of the accused traded information on Báez Guevara‘s network in exchange for plea deals with reduced prison sentences.

“In this case, by pulling strings, pulling threads and through comprehensive investigation, we were led to Miguel Guevara,” said Paul Schultz, the special agent in charge at the Coast Guard Investigative Service.

Of the 23, the indictment lists 20 different incidents where the conspirators were alleged to be in possession of drugs meant for distribution in Alaska. In total, those incidents indicate about 15.5 pounds of heroin was intended to be sold, along with nearly 5 1/2 pounds of methamphetamine and just over a half-pound of cocaine.

“In any operation, you’re probably just getting a fraction of the narcotics that are coming in when you’re doing these types of operations,” commented Assistant U.S. Attorney William Taylor.

Then on Friday, September 10, 2021, the leader of the operation Miguel Báez Guevara was closed in on and arrested in Sonora, Mexico by members of the Instituto Nacional de Migración (National Institute of Migration).

This agency was likely the one used to take down Báez Guevara because, as mentioned earlier, Báez Guevara was actually not a Mexican citizen, but a US citizen. He had likely violated a Mexican migration law during his time spent living in Mexico during 2016-2021. This is especially likely since Báez Guevara did not return to the US and returning often “resets” the amount of time allowed to live in another country without violating the law.

Following his arrest in Sonora, Mexico, Báez Guevara was deported to the United States. U.S. Law Enforcement arrested Guevara upon his arrival in Arizona.  Báez Guevara pleaded not guilty on September 14, 2021, in federal court in Phoenix, Arizona