Michoacán: Terrorist Attacks, The New Strategy Of The CJNG 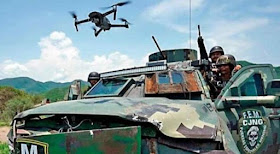 The inhabitants of the region have been left in the middle of the dispute and without police or military assistance.

In its advance to take over the Tierra Caliente region in Michoacán, the CJNG initiated a new strategy: through drones it carries out bombings on rural communities, whose inhabitants flee in terror, leaving large areas used for drug trafficking available.

The Jalisco New Generation Cartel (CJNG) is a king itself owner of the territory of Tierra Caliente, in Michoacán. Aguililla, Coalcomán, Tepalcatepec, among other places, have been the scene of a dispute of more than just a drug trafficking route for weeks.

The objective is total control of the territory and its population, which lives besieged by the constant clashes between the CJNG and Cárteles Unidos, a criminal organization formed by the Nueva Familia Michoacana, the Viagras, he Knights Templar and the Tepalcatepec Cartel.

The inhabitants of the region have been left in the middle of the dispute and without police or military assistance, despite the fact that the Army and the National Guard have facilities near the area.

In its unstoppable expansion through Michoacán territory, CJNG is seizing the communities of the municipality of Tepalcatepec, through constant aerial bombardments carried out with drones that launch powerful explosives on the defenseless rural population.

These terrorist attacks are the innovative advance strategy of the criminal organization, since they cause the inhabitants to flee in fear so that later the armed hitmen enter the empty communities by land, gradually seizing this important drug route located in the so-called Tierra Caliente, adjacent to Jalisco and Colima.

To save their lives, the thousands of expelled residents take refuge mainly in the municipal seat - already practically besieged by the cartel -, emigrate to other states or flee to the northern border with the intention of entering the United States as political asylum seekers, victims of a humanitarian crisis of great proportions.

"Here in Michoacán the conflict is spreading: first it was in Aguililla and now it is in Tepalcatepec, where crime groups have already strangled the population," says the bishop of Apatzingán, Cristóbal Ascencio García, worriedly.