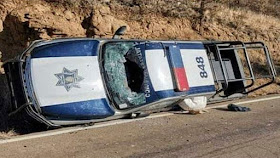 NOTE: It is being alleged that La Línea is behind the attack, but no confirmations or claims of responsibility yet.
The ambush by alleged hitmen left four police officers killed and seven more who were injured in the town of La Concha, municipality of Madera, Chihuahua, according to the state's Public Security Secretariat (SSPE). The officers of the Division of Rural Operations carried out patrolling and surveillance when they were attacked and as soon succeeded in repelling the assault, as alleged members of organized crime fled. 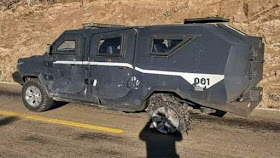 Armed subjects were reportedly stationed at high points along the road.
Preliminary reports highlighted that the assassinated officers were Sergio LE; Efrain RR; Noel Omar RL; and Luis Raúl PG. After the ambush, an operation was deployed to find those responsible, but no further details have been reported. The governor, Javier Corral, has not commented on the crime committed against state agents.
The actions add up to the third attack against state police in the same municipality in the last four months. On November 5, 2020, there was an attack against elements of the State Security Commission, and previous attacks on National Guard personnel. This happened while the uniformed men circulated in a group from the Ejido El Largo Maderal to the municipal seat of Madera. 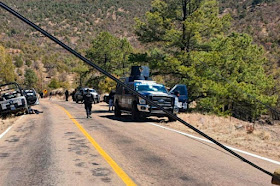 Chihuahua is a border state that represents part of the so-called “Golden Triangle,” a mountainous region where the planting and production of narcotics has been established for decades. Madera is located just over four hours from the state capital and borders the mountainous area of ​​Sonora.
At the beginning of 2020, on January 17, around 150 hitmen from La Línea broke into the communities Las Pomas de Abajo and Las Pomas de Arriba, in the municipality of Madera, where they burned at least 22 houses and 7 vehicles, in addition to kidnapping an undetermined number of people.
In this municipality, located in the Sierra Tarahumara, there is a bloody war between Los Salazar and Los Jaguares against La Línea, which has left rivers of blood due to executions and criminal acts. At the beginning of October 2019, the information circulated that Francisco Arvizu, El Jaguar, had been killed in a confrontation that took place in Las Pomas, in the municipality of Madera, but it was not confirmed by the authorities.
Source: Infobae
Socalj Posted at 3/31/2021 07:32:00 PM
Share