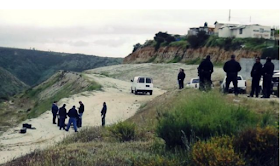 On Monday morning last week, the corpses of two municipal police officers were found in the municipality of Guadalupe y Calvo. They were identified as 31-years-old Miguel Ángel Armendáriz Rodríguez and 21-years-old Nancy Montañez Macías. Both were detached to the community of Baborigame, located some 50 kilometers northwest of the town of Guadalupe y Calvo. Their slain bodies, which showed several bullet wounds, were dumped in a place known as Puerto del Aire, situated outside of Baborigame. Reportedly, Miguel Ángel Armendáriz Rodríguez was a former State Police officer. He had been working in his new role as commander of the municipal police of Baborigame just for a few days. According to Chihuahua’s Attorney General, César Augusto Peniche, the criminal group responsible for the killing has already been identified. However, besides stating the obvious, namely that a criminal group active in the region has conducted the execution, no further relevant details allowing to draw conclusions about the group have been revealed.

Generally speaking, Chihuahua’s southern region has seen another spike in violence in recent time. This is owed to the battle between rivaling criminal groups. Not only is the Sinaloa Cartel fighting against La Línea, but also among themselves.


When it comes to Baborigame, the community has repeatedly been a hotspot of violence since the 1970s. Known as the heart of the notorious Golden Triangle, its population have been subject to a level of marginalization, inequality, and impunity, which has hardly been seen in other Mexican towns. Due to its location, Baborigame is of high strategic importance for the criminal cells operating in the region. The town serves as a key route for the poppy and marijuana shipments which stem from the numerous cultivation and production areas the Golden Triangle offers.

Although it is very difficult for somebody just standing at the sideline to precisely determine which CDS cell held and currently holds power in and around Baborigame, I try to sort things out as good as I can. Around the year 2014, a CDS cell known as “Los Pintos” took control of the town. The group is led by a mysterious figure, namely Héctor Román Angulo aka “El Pinto”. Not much is known about him – there is not even a mugshot. Nevertheless, he is said to be a very powerful figure within CDS. Purportedly, he was born in the town of San Javier (Sinaloa), which is located in close proximity to the municipality of Badiraguato, home to figures like “El Chapo”, “El Mayo”, and “El Azul”. In addition to that, he is about the same generation, growing up alongside them. According to reports, he had supplied “El Azul”, who allegedly died in 2014. As a side note; it is remarkable what a low profile this guy has been able to keep over all these decades, particularly against the background of the presumed power he holds within CDS.

However, reportedly somewhen in summer 2016, a splinter group of “Los Pintos”, dubbing themselves “Los Azules”, emerged (I have not found any evidence of a relation to “El Azul”; allegedly, they called themselves like that because of the color of the clothing they typically wear). For the next about two years to follow, both groups had fought a bloody turf war against each other, badly affecting Baborigame’s local population. Eventually, somewhen in the beginning of 2018, an apparent truce was allegedly reached, bringing the violence in comparison to previous months down a bit. Since then, almost nothing has been reported about the two groups. Just as “El Pinto”, they seem to have kept themselves out of the “spotlight” (which is actually an improper word considering how underreported the Golden Triangle is in general).

In light of the above, it seems plausible that criminals affiliated or at least formerly affiliated with "Los Pintos" or "Los Azules" have killed the two municipal police officers. As there is a plethora of different potential motives for the execution, including one of the victim’s former profession as State Police officer, I won’t presume to make an assumption.

Without trying to overcomplicate things – it could have even been La Línea sicarios responsible for the execution. The reason for this (to be honest rather far-fetched theory) is that at least to some extent, there is a La Línea presence in the municipality of Guadalupe y Calvo. According to a statement made in April by the Attorney General César Augusto Peniche, it was noticed that some CDS members, mainly in the area of Sinaloa and Durango, have flipped side joining La Línea. This has caused an increased number of clashes, including the one in April in Atascaderos, located in Guadalupe y Calvo (reported by BorderlandBeat on the 11th of April 2019). Another indication for the presence of La Línea sicarios in the area was highlighted through a recent incident. In the end of last month, six mutilated bodies were dumped in the town of San José del Sitio, situated about 85 kilometers northwest of Parral. The victims, who showed signs of torture, wore military-style clothes. A placed narcomensaje identified them as La Línea members. It is assumed that Antonio Leonel Camacho Mendoza aka “El 300”, commanding the CDS cell in and around Parral, was behind the killing. Interestingly, three out of the six slained presumed La Línea members were from Baborigame, again outlining at least some sort of presence they must have in the area.

Whoever is to blame for the killing of the two officers, one thing can be taken for granted: the high level of violence will continue unabated in Chihuahua’s southern region. At least for the short term, or in other words, as long as so many cells are operating in the area and continue to fight each other. The recent “Gente Nueva” video showing dozens of armed sicarios, purportedly recorded somewhere within the municipality of Parral, could not be more symbolic for the current security crisis the region is facing.