Sinaloa Farmer Runs Over and Kills his Kidnappers in Sonora

Yaqui for Borderland Beat from: Riodoce 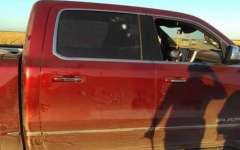 Farmer from Sinaloa runs over and kills his kidnappers in Sonora

Two alleged kidnappers died when they tried to deprive a farmer from Sinaloa of his freedom and he ran over them in Sonora.


According to information from the Opinion Sonora portal, the farmer is Miguel Ángel and he is originally from Culiacán, Sinaloa. The attempted kidnapping occurred on Sunday at Rancho San Juan, in Hermosillo Sonora.


The farmer said that armed persons arrived aboard three vehicles to his property and he fired at them.


He and other people accompanying him  sheltered in a Chevrolet Cheyenne truck and a Volkswagon Touareg, both armored. The farmer also repelled the attack by shooting and then ran over two of the alleged criminals, who died on the spot, while another fled.


Before the authorities he claimed to have documents that certify the registration of weapons before the Secretariat of National Defense.


Elements of the Municipal Police of Hermosillo managed to arrest a man who identified himself as Alán "N.", 33 years old, originally from Navojoa, as one of those involved in the attempted kidnapping.


They also secured 10 long and four short weapons, several loaders, useful cartridges and percussion caps, as well as bulletproof vests, a Honda Pilot vehicle in which the detainee was traveling; and a red Chevrolet Tahoe with more alleged attackers.