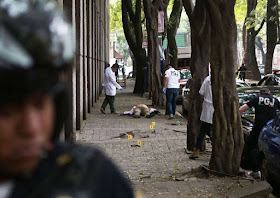 MEXICO CITY - The bodyguard for a prominent Mexican journalist thwarted an attempt to steal the columnist's car in an upscale Mexico City neighbourhood Monday, killing one of three armed robbers and wounding another in an exchange of gunfire, authorities said.

Columnist Héctor de Mauleón, who was inside a nearby restaurant and not injured, is known for his critical writing on organized crime for the newspaper El Universal and has been threatened on numerous occasions. The newspaper said de Mauleón had hired the retired military officer as his bodyguard because of the threats.

El Universal said that as de Mauleón sat in the restaurant on a tree-lined street in the Condesa neighbourhood, three gunmen approached the car, where the armed bodyguard was waiting. The paper said the bodyguard "confronted the assailants and left one of them dead, while another was wounded and one more fled

The city prosecutor's office confirmed that gunfire was exchanged, but mentioned only the dead assailant and the wounded one. It said the wounded assailant was taken to a hospital in police custody.

An Associated Press journalist at the scene saw a body loaded into a forensic van.
De Mauleón writes frequently about organized crime in Mexico's capital and has been outspoken about extortion rackets in Condesa. In 2017, Mexico's National Human Rights Commission condemned a chilling video threat against De Mauleón.