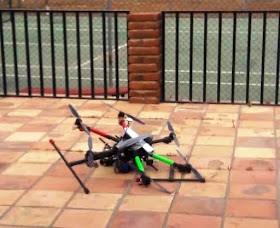 After  07:00 hours on Tuesday, July 10, two drones were directed to  fly over the house of the Secretary of Public Safety of Baja California, Gerardo Sosa Olachea, located in the Los Laureles neighborhood, in Tecate, near the road to Cove.

Shortly before 07:30 hours witnesses could see when the devices descended on the property, which at that time was occupied only by the family housekeeper.

The headquarters  of the State Preventive Police (PEP) received two reports regarding the drones, first, of the drones  flying over and the second indicating that in the house of Sosa Olachea they had located at least one of the drones equipped with camera and audio. In this device, fastened with adhesive tape,  were two fragmentation grenades that failed to  detonate when they descended.


When the two grenades landed  in his yard, the Secretary of Public Security of the State, Gerardo Sosa Olachea, having just exited  his home in Tecate, was about to enter his car, to attend a meeting in Tijuana with the Consul of the United States , Sue Saarnio.

After the attack the area was cordoned off, the explosive devices remained in the possession of the National Defense Secretariat for investigation. The drones will be reviewed by the Cybernetic Police of the SSPE in an attempt to know the origin and the route that it followed until reaching the airspace of the official's house.

Although the drones are medium capacity, and require that the person who manages them is close to the perimeter of flight, no one was apprehended.  In fact, it assumes that the attackers fled when they observed that the grenades did not activate.

Sosa Olachea told ZETA that he has not received threats since he took office in October 2017, but he presumes that the attack could have come from the drug cartels "to which we have hit with many seizures. Confiscations that are constant, drug dealing, laboratories located in Tecate and Rosario.”

For reasons of the investigation carried out by the Attorney General of the State and the Ministry of Public Security, with the intervention of SEDENA regarding  the explosive devices, Sosa Olachea reserves the name of the cartel of which they suspect, since he said, he does not want to put them on alert.