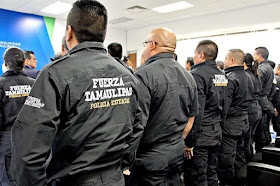 Reporter: Benito Lopez
With resources from the Merida Initiative, 63 Commanders of the Tamaulipas State Police received training from certified instructors sent by the United States.

The training focused on front line leadership to deal with better strategies for organized crime. The head of Political and Economic Affairs of the United States Consulate in Matamoros, Jose Gutierrez, said that this was the first of its kind since the creation of the bi-national security support program.

"The project seeks to provide training to the front line supervisors, and is a joint effort between the United States and Mexico to strengthen security and support the development of Police in Tamaulipas", he said.


Gutierrez, who attended the closing ceremony of the Front Line Supervisor Course, said that the administration of former President Egidio Torre did not achieve greater cooperation in Police training, such as the one with the new Government has.

"Before with the State Government there was not so much input, but now with the new Governor, Francisco Garcia Cabeza de Vaca, has allowed entry and this is a course that had not been done before, but we are already starting and this year I hope we can expand", the American Diplomat said.

After recognizing that much remains to be done in the area of Police training, the head of the State Public Security Secretariat, Luis Felipe Lopez Castro, said that these agents are those who face daily insecurity situations in the course of their surveillance tasks.