El Rana, of the Sinaloa Cartel arrested in Baja California 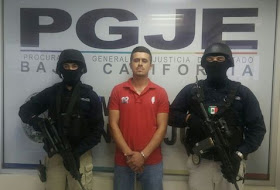 El Rana is accused of having participated in the assassination of three agents of the Municipal Police in Tijuana in 2009, said Jorge Alberto Alvarez Mendoza, Sub Attorney General of the State.

He explained that the detention of Peralta Reyes, 29 years of age, derived from an operation from an arrest warrant that he had against him for the homicides of the Municipal Police officers Arturo Flores Espinoza, Marcos Samuel Kuk Sierra and Napoleon Garcia Perez.

Alvarez Mendoza detailed that the three uniformed officers were shot to death on the 18th of September of 2009, were found in the parking lot of a convenience store located on Paseo Ensenada Avenue in the Playas de Tijuana fraccionamiento, where minutes earlier that had been speaking with fellow workers aboard their respective patrol cars.


He added that El Rana executed the three officers in the company of another six accomplices of who, four of them have been arrested and received sentences of up to 30 years in prison.

"With a base in the practical operations of the triple homicide, could prove that El Rana who headed the commando of sicarios that took the lives of the three elements of the Municipal Police of Tijuana, utilized assault rifles known as "Cuerno de Chivos", or AK-47.

Deriving from sufficient elements of proof, the now detained El Rana together with his accomplices will be consigned to the 8th Judge of the Primary Instance Penal Circuit for orders of apprehension, who motioned the recall of the arrest warrant, which was presented in 2011 for the crimes of homicide, attempted homicide, intentional damage to property and organized crime.

He indicated that El Rana would be held in the State prison at the disposition of the Judge, who will resolve the judicial situation of the detained, which in case of being subject to criminal proceedings will be carried out under the previous judicial system.