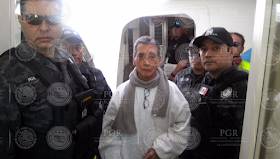 The former governor of Quintana Roo, Mario Ernesto Villanueva Madrid was extradited from the U.S. returning to Mexico.  He was received by PGR (Attorney General Office) and AIC (Criminal Investigation Agency)elements at 12:30pm at the Mexico City Airport.

The prisoner had been detained at the Migrant Care Center in Louisiana since  Dec. 30 when he left the Lexington hospital prison.

The family of Villanueva Madrid reported making a  request for house arrest because of chronic health issues.  For years, Villanuenva, has Chronic Obstructive Pulmonary Disease (COPD) which had been acquired during his imprisonment in the high security prison of Altiplano, in the State from Mexico.

He is expected to undergo a medical examination upon arrival and will then be transferred to a hospital or the northern prison.

His motto was “Don’t bring your bullshit, in this state I am in command”, his moniker is “El Chueco” meaning crooked, not for his character but his asymmetrical facial appearance, the result of  a paralysis.  Villanueva, who on December 23, 2016 exited  the United States prison system for extradition returning him to Mexico, to serve another 22 year incarceration.

The former governor of the Mexican state of Quintana Roo who admitted  conspiring to launder money, in a New York drug case,  was sentenced in June of 2013  to just under 11 years in prison, but only served 3 ½ years behind bars in the United States.  To read further information use this link.
Guest Reporter Posted at 1/18/2017 05:41:00 PM
Share