El Chapo will be extradited to the USA when recaptured

The president of the Bicameral (twin house) Commission, Adriana Gomez, said that they had known that since June 2012 the movement sensors at Altiplano had stopped working. 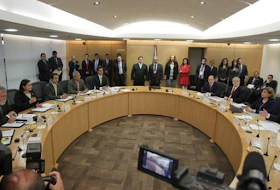 Reporter: Milenio Digital
The extradition process against Joaquin Guzman Loera "El Chapo", has already started, for when he is recaptured he will be immediately extradited to the United States, said Adriana Gonzalez, president of the Bicameral Commission.

"Yes I have personally asked Miguel Angel Osorio chong about the extradition of El Chapo, and he said that the process was started and will continue with the re capture of the criminal, she said in an interview with Ciro Gomez Leyva, for Grupo Formula.

He said that after an investigation they made, they found out that since June of 2012 the motion sensors had malfunctioned.

I asked explicitly when they had malfunctioned, these sensors that detect whichever movement in the cell block. They said to me that in april of 2012 they had started to play up, and in June stopped working altogether.

In an interview with Milenio television, the Senator Fernando Yunes after his meeting yesterday with the Secretary of the Republic, Miguel Angel Osorio Chongo, and the Attorney General Arely Gomez, and the Commissioner, Monte Alejandro Rubio, it was very exhaustive.

The official was very exhaustive and it served to resolve some doubts about what happened on Saturday. The idea stays with me that there has been complicity, but we cannot yet say to what level.