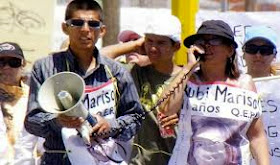 Son and mother in protest


Four years after his activist mother was gunned down in front of the Governors
palace, Juan Frayre Escobedo is granted political asylum

An United States immigration judge granted political asylum to Juan Manuel Frayre Escobedo, son of slain activist Marisela Escobedo Ortiz, who was assassinated in 2010, outside the Governors Palace of Chihuahua.  Marisela was protesting in  Plaza Hidalgo, demanding justice into the investigation of the murder of her daughter Ruby.

In a telephone interview from San Antonio where he resides Juan said; "I feel happy and comfortable that it could solve my legal status in this country. It has been long wait for the courts to make a decision. With laws in this country you never can be sure until you get the answer."

He stated he received the notice a couple of days ago.

“I was told that my case had been resolved in my favor and that the Government of the United States gave me the granted my request in October 2012," he declared.

The 36-page document, which contained the applicant's testimony and evidence, was reviewed by the Immigration Judge Craig A. Harlow, who determined that there was sufficient evidence.

He said it now expects his brother Alexander and his uncles Ricardo and Hector Escobedo, the same fate in his trial before the Court.

"For now we must continue to support my family and ‘Mexicans in Exile’, an organization that supported me, they help new immigrants who lack the resources and provide legal advice, said Juan.

On May 3, 2012, the US granted asylum to his niece, his murdered sister’s daughter, Heidi Ruby, she was four years old at the time. After Ruby’s murder, Heidi was being raised by Marisela until her murder, Marisela’s brother fled for safety, to the U.S. with the child and his family after Marisela’s death. 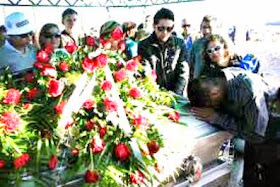 Juan leans onto his mother's casket

Regarding the case of his mother said still in the "air". "There is nothing clear and the government's position is the same. A government that does not speak the truth and who is not willing to give a solution," he said.

He added that violence in Mexico will not stop while the government continues collusion with criminal groups.

He said the threats continue against people who get up and point out the injustices through similar situations as those undertaken by his family.

"Although the government gives positive statistics and ensures that things are changing, there is continued aggression against the people. The persecution, and threats will not stop, "said the son of activist. 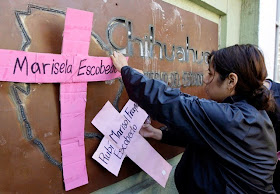 As an example, he mentioned the recent case of journalist Villeda Moses Rodriguez, as he took refuge in El Paso last January 4, for fear of losing his life.

Meanwhile, Frayre attorney, Carlos Spector, was satisfied with the resolution and said it will continue in his line of defense and look for the safety of their clients who flee their country due to the violence they suffer.


"Bjeff" collected these links to posts detailing the backstory.  Readers will remember the recent posts about "El Wicked" the murderer of Marisela.  He was recently killed in his prison cell.