Who is the new head of security in Michoacan


Translated for Borderland Beat from a Michoacan 3.0 article by Otis B Fly-Wheel


Discrete, with little operational experience but known as a user of intelligence information. The General Pedro Felipe Gurrola Ramirez, in December, left the command of the Sierra Madre task force, in Badiraguato, Sinaloa, to take command of the 8th Military zone in Reynosa, Tamaulipas.


Gurrola left the cradle of narco trafficking, where he had a controversial presence in command of his troops accused of shooting a beauty queen, to reach one of the most explosive cities in the country.

One afternoon in 1997 , Colonel Pedro Felipe Gurrola Ramirez arrived at the office of the Secretary of National Defense, General Enrique Cervantes Aguirre. Colonel Gurrola served that year as Deputy Secretary of the head of Sedena, and hours earlier had fruitlessly tried to get a message to his boss.

Hours later Cervantes Aguirre gave him a call to find out what he wanted that morning. Gurrola said that his brother, also a Colonel, came to his office to tell him about his friend who was in Military Intelligence, Colonel Pablo Castellanos Garcia , had some confidential documents in his office at the Defense College, which was a file relating to an individual identified as " Pedro " who was under investigation, Gurrola said his brother had the file because he wanted to know what its contents were.


They were not investigating it , but the fact that those intelligence reports with information reserved on the drug trafficking in the country , were out of the office of the Secretary of Defense itself constituted a leak of information.
That episode was the beginning of the history that revealed the penetration of the DTO's into the Army , and for the first time , shook to the core , the Military Leadership. The file " Pedro " , refers to a pursuit taken by a Group of Military Intelligence with the help of personnel of the American Embassy in Mexico , on the boss Amado Carrillo Fuentes ," El Senor de los Cielos" , "the Lord of the Skies" , and was just one work of spying that was carried out.

The then Colonel Gurrola Ramirez appeared in this story , in his capacity as Deputy Private Secretary of General Cervantes Aguirre, and was just one more piece of a scandal that shook the Army to the core, when several Generals were identified as being networked to Drug Trafficking Organizations .

At the end of the year, Colonel Gurrola , a Calvary officer graduated at the beginning of the 1970's in military college. He held various positions of lesser importance , taking into account that years earlier he had been an Assistant Military Attache at the Mexican Embassy in Washington , United States.

Those who knew him at the time in the Army , agreed that he did not have much operational experience, he was first section Chief , Human Resources, in the 25th Military zone of Puebla when he was captain. He had some command of troops who were armed , but nothing that was emphasizing him over his contemporaries.

In the cradle of the drug trafficker

For those years in particular that he was in Deputy Secretary of Defense during the six year period of Ernesto Zedillo, the now Brigadier General Gurrola Ramirez had not returned to have as much media exposure as he had in 2012 and 2013, in his Command Posting for Task Force Sierra Madre , which has its headquarters in Badiraguato , Sinaloa.
Gurrola Ramirez arrived in Sinaloa at the end of 2011, the Military advance had occupied the Headquarters of the 19th Military Zone in Tuxpan , Veracruz , but their presence was not reported by local media until January 2012 , when he headed for a few days of interim command of the 9th Military Zone.
Gurrola took charge of the Sierra Madre Task force as a result of the unsuccessful operations between 2010 and 2011 by a special group of the Army , commanded by General Antonio Gurrola Calzada and supported by the North American Intelligence Services, operated in several mountain communities to try to catch " El Chapo " Guzman Loera.

Discrete , and a man of few words , but known as user of intelligence information, General Gurrola Ramirez, knew of his presence in Badiraguato , the Municipality considered " the cradle of narco trafficking in Mexico ".  The General would by analyzed with a magnifying glass by groups of organised crime who felt affected by his presence.
As time passed , in November of 2012 his troops , engaged , on the outskirts of Guamuchil, and armed convoy of hit men that guarded Orso Ivan Gastelum , " El Cholo Ivan" , head of a group of hit men responsible for control of the Evora Valley for " El Chapo " Guzman Loera. This is the convergence of three Municipalities of Angostura , Salvador Alvarado , and Mocorito. Maria Susana Florez Gamez was killed in this confrontation , a Sinaloa beauty queen , who three months previously , had been crowned Miss Sinaloa 2012, who became the partner of " El Cholo Ivan ".
The name of General Gurrola Ramirez appeared a few days later in a series of mantas located in the streets of these Municipalities, like Guamachil , where " Cholo Ivan" accused him of murdering Maria Susana , saying that she was not carrying a weapon , but was on the ground behind the vehicle asking them not to shoot her. In the same messages they accused the Military Chief of having connections to the Beltran Leyva Organisation, who had as chief of operations in the north of Sinaloa , Fausto Isidro Meza Flores " El Chapo Isidro". 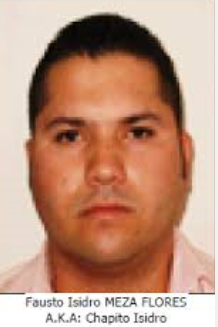 With the passage of time , the presence of the General left the spotlights, local media reported only one public appearance in which the General reported on the drug seizures for 2012. A few week after , to commemorate the death of his girlfriend and former beauty queen, mantas appeared in a few towns such as Guamuchil, Mocorito and Culiacan , the messages on the mantas , were from " Cholo Ivan " and called for and investigation into the death of his girlfriend , which he blamed on the General.
With this act of propaganda , attributed to " El Chapo" Guzman Loera, the Secretariat of National Defense announced that as of December 2nd 2013 the General would be moving to the 8th Military Zone with its head quarters in Reynosa , Tamaulipas on the border of south Texas.
Gurrola Ramirez arrived in Reynosa in the days when there was a dispute within the ranks of the Cartel del Golfo ( Otis : when wasn't there ? ) . This organization has revived the bloody clashes in this city of the border region in the wake of the arrest this year of Mario Ramirez Trevino , " El Pelon " or " X 20 ". He was one of the main operators for Ezekiel Cardenas Guillen " Tony Tormento ", killed by the Marines in 2010 , and Eduardo Costilla " El Coss " , arrested in September of 2012.

Having remained in control of CDG in the Municipalities of Rio Bravo and Reynosa , Ramirez Trevino  unleashed an internal take over of the whole cartel. He did not succeed but the vacuum that his capture caused , caused disputes that returned this city to the most violent in the entire country. General Ramirez arrived at the beginning of December that year.
Original article in Spanish at Michoacán 3.0
Otis B Fly-Wheel Posted at 1/27/2015 09:48:00 AM
Share