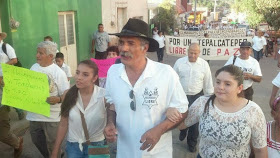 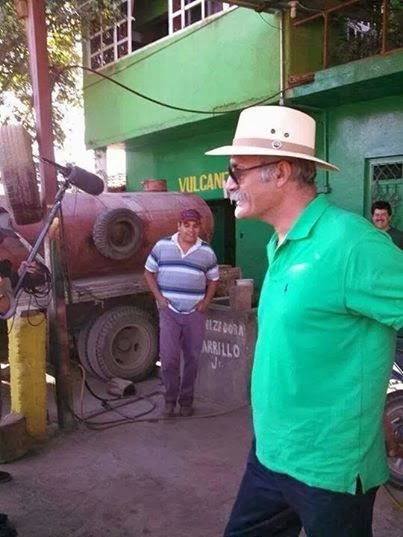 Dr. Manuel Mireles, founder of the autodefensas in Michoacán, has returned to his city of Tepalcatepec this morning shortly before 9 AM.  He has arrived to the city, will meet with autodefensas coordinators and attend the autodefensas anniversary celebration that will be held at 9PM this evening.
Yesterday Dr Mireles released a 9 minutes video, in which he appeared much healthier, determined and strong.

He also sounded much like the person people came to admire for his leadership before the January 4th plane accident that left him partially paralyzed and critically injured.
Last week he completed his 4 week intermediary therapy and on Thursday he underwent an extensive evaluation to determine if therapy would continue.  It was determined that he will continue the therapy for another 2 weeks.

His chief complaint has been the discomfort due to 44 screws securing his facial bones, to aid recovery of the facial skeletal trauma sustained in the plane crash.  Two weeks ago they were able to begin the process of screw removal and removed 4 screws at that time.
In the video he stresses the need to continue the fight against organized crime, until the cartel is dismantled and leaders captured.  He also says that the government structures must also be cleaned or corruption or the mode of death and impunity will continue.
“A year ago we took up in arms, my congratulations to my colleagues, today should be  a day of dignity, let us feel proud of having started this fight, we are an example of courage and dignity”
Dr. Mireles said autodefensas  groups have achieved cleared Templarios from at least 20 municipalities in Michoacán . He mentioned the communities of La Ruana, Buenavista, outspoken criticism Coalcomán, Hawk, Aquila, Chinicuila, Coahuayana, Tancítaro, Los Reyes, Peribán, Churumuco, La Huacana, San Juan Nuevo, Ario de Rosales, Apatzingán Parácuaro, New Italy, Lombardy, Tocumbo and Yurécuaro plus tenure Calzontzin in Uruapan.
"In the villages we've cleaned, now disappeared;  kidnappings payment of tax (extortion piso) , rapes of  women and executions," he continued, "We will advance to support the people who have been violated and humiliated. And continue to insist that corrupt government institutions and partner of organized crime to be cleaned so that people can gradually regain confidence in the government. "
Update: At 2PM Central time the newspaper "Reforma" reported: 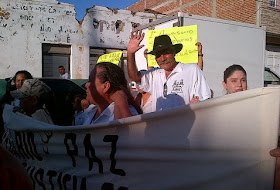 "We  separate ourselves from the self-defence forces and make them the knowledge of those who are in the fight and those who are our allies: Aquila, Coalcomán, Aguililla, Chila, chila Naranjo, La aguaje, Apatzingán with its leader father Goyo, a part of Tepeque and La Ruana, are the only allies and hopefully soon in the next few days, the return of Dr Mireles."( last week Padre Goyo announced "Dr Mireles will come back very soon-just as this document alludes to)


The reasoning, according to the document, was a grievance against the practice of  allowing “reformed former cartel” members into the autodefensas union, which is against the initial premise of the group.


In particular Juan José Farías, alias El Abuelo”, who had/has know ties to organized crime and who has become an integral member of the autodefensas movement, since the accident of Dr Mireles.
Prior to the accident the Committee of Human Rights could find no abuses by the autodefensas group, and no complaints, not true with federal, state and municipal agencies.
However, since the accident, there have been complaints from citizens of abuses and coercion by autodefensas, such as illegal entry into private homes, and heavy pressure on citizens to join the group and take up arms.  This is not widespread, but it has created a shift to uneasiness among the people and supporters of the union.
There is question of how Papa Smurf was appointed spokesman, Hipolito Mora, who works closely and appears supportive to Smurf, says he was never a part of a vote, and does not know how or who appointed Smurf to the position.
It is frightening, that a leader would accept a decision, without asking questions, or requiring a vote, as stipulated in the rules of the union, any decision must be ratified through a vote of leaders and coordinators of all the communities.  This was not done, leaving an impression that there is an element of intimidation occurring within the group.
The following is point 4:
"Mr Estanislao Beltran better known as Papa Smurf ceases to be our spokesman, because the leader represents other interests that do not concern our fight, he is spokesman for, and essentially  helpful  to Jose Alvarado, alias “El Burrillo”, las Viagras, “El Americano”, Beto tragabalas, Rafael Sanchez Moreno alias “El Pollo”, and all the former Templarios that he has welcomed and giving refuge to."
Since the document was released spokesman Papa Smurf addressed it, by dismissing it and calling it false.
Whatever the case, false, not yet ratified or wishful thinking, there are serious problems and division within the group.  Which in my opinion is exactly what both the government and Templarios hoped for.
This is an evolving story, one that has been gaining importance for a month, I will keep you posted as much as I am able to.