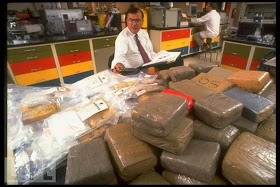 El Chapo contributed money to the campaign of Enrique Peña Nieto in order to become a candidate for the presidency, a former director of intelligence for the DEA revealed.

Phil Jordan said that something bad happened between the PRI and El Chapo because of his capture.  He says that it was a triumph for Mexico, that the president allowed the apprehension of El Chapo.

“Something bad happened between the PRI and the narco,” he said when being interviewed on a special segment on Univision.

The interviewer asked him: What evidence is there to confirm that El Chapo supported the campaign of Peña Nieto?

“That is documented in past campaigns of the PRI. El Chapo, Caro (Quintero), everyone gave money to whoever was running for president.  I don’t have the papers but there are intelligence reports indicating that the cartel of El Chapo is very involved in politics.”

Wouldn’t it be contradictory that the government of Peña Nieto was the one who captured El Chapo but he received money from him?

Jordan said that the relationship between the narcos and Mexican politicians is well known; the ones they need to operate and create their empires.

The interviewer then asks: If Chapo talked about his ties with Mexican politicians, would we have a big surprise in the political landscape of this country?

“There won’t be any surprises because the PRI and Chapo know very well that he was well involved in politics with money,” he replied.

Another question asked was that if Chapo also bribed officials from the United States.  Jordan replies:

“With the money that El Chapo has anything is possible.  Corruption just doesn’t occur in Mexico, it also occurs in the U.S.”

He warned that the jail that El Chapo ends up in, he can also run his business.

He didn’t rule out, however, that El Chapo negotiated his capture.
He stated that with Mexican narcos, there shouldn’t be more than one king, and with Caro Quintero free, he may be the new king. 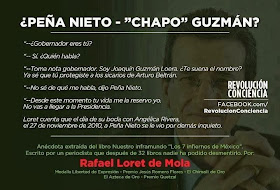 -“Governor is that you?”

-“Take note governor.  I’m Joaquín Guzmán Loera.  Does the name ring a bell?  I know that you protected the hitmen of Arturo Beltrán.”

-“I don’t know what you’re talking about,” said Peña Nieto.

-“From this moment on, I’m going to reserve your life for myself.  You will never reach the presidency.”

Loret notes that on the day of his wedding with Angélica Rivera, on November 27, 2010, Peña Nieto seemed very anxious.