More on the Chapo Capture and the Aftermath

Editor Note: Follow up with more on the details of El Chapo arrest and operation. 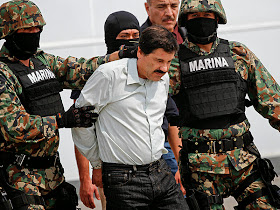 Although Guzmán had long hidden successfully in remote areas of the Sierra Madre mountains, the arrested members of his security team told the military he had begun venturing out to Culiacán and the beach town of Mazatlán.A week prior to his capture, Guzmán and Zambada were reported to have attended a family reunion in Sinaloa.

The Mexican military followed the bodyguards' tips to Guzmán’s ex-wife's house, but they had trouble ramming the steel-reinforced front door, which allowed Guzmán to escape through a system of secret tunnels that connected six houses, eventually moving south to Mazatlán.

On February 22, 2014 at around 6:40 a.m., Mexican authorities arrested Guzmán at a hotel in a beach resort area in Mazatlán, Sinaloa, following an operation by the Mexican Navy, with joint intelligence from the DEA and the U.S. Marshals Service. A few days before his capture, Mexican authorities had been raiding several properties owned by members of the Sinaloa Cartel who were close to Guzmán throughout the state of Sinaloa. 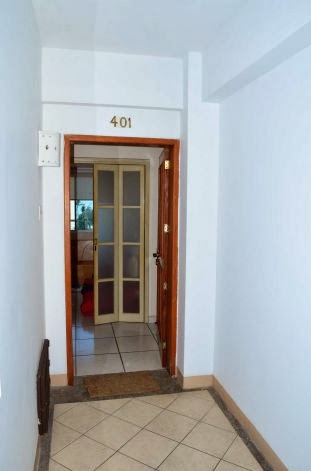 The operation that led to his capture started at 03:45 a.m., when 10 pick-up trucks of the Mexican Navy carrying over 65 soldiers made their way to the resort area. Guzmán was hiding at the Miramar condominiums, located at #608 in Avenida de Mar street.

Mexican and U.S. federal agents had leads that the drug lord was at that location for at least two days, and that he was staying on the condominium's fourth floor, in Room 401. When the Mexican authorities arrived at the location, they quickly subdued Carlos Manuel Hoo Ramírez, one of Guzmán's presumed bodyguards, before quietly making their way to the fourth floor through the elevators and stairs.

Once they were at Guzmán's front door, they broke into the condo and stormed the two rooms it had. In one of the rooms was Guzmán, who was laying in his bed, reportedly with a female companion; he tried to resist arrest and grab an AK-47 he had close to him. Amid the quarrel with the marines, the drug lord was hit four times. By 06:40 a.m., he was arrested, taken to the ground floor, and walked to the condo's parking lot, where the first photos of his capture were taken.

His identity was confirmed through a fingerprint examination immediately following his capture. He was then flown to Mexico City, the country's capital, for formal identification. According to the Mexican government, no shots were fired during the operation.

Few details of the drug lord's arrest were available early in the morning while the mug shot of Guzmán, handcuffed and with a few cuts on his face, circulated among law enforcement. Guzmán was presented in front of cameras during a press conference at the Mexico City International Airport that afternoon. 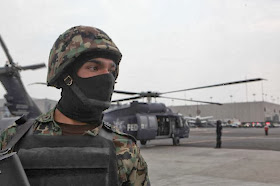 Following the press conference, he was transferred to the Federal Social Readaptation Center No. 1, a maximum-security prison in Almoloya de Juárez, State of Mexico, at around 02:55 p.m via a Federal Police Black Hawk helicopter. The helicopter was escorted by two Navy helicopters and one from the Mexican Air Force. Surveillance inside the penitentiary and in the surrounding areas was increased by a large contingency of law enforcement. 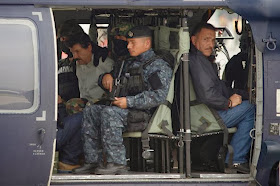 Mexican President Enrique Peña Nieto confirmed the arrest through Twitter and congratulated the Secretariat of National Defense (SEDENA), Secretariat of the Navy (SEMAR), Office of the General Prosecutor (PGR), the Federal Police, and the Centro de Investigación y Seguridad Nacional (CISEN) for Guzmán's capture. Within Mexico, several politicians recognized the efforts of the Mexican government in capturing Guzmán, including the former Presidents Vicente Fox (2000–2006) and Felipe Calderón (2006–2012). 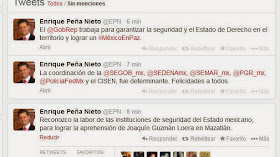 In the United States, the Attorney General Eric Holder said Guzmán had caused "death and destruction of millions of lives across the globe" and called the arrest "a landmark achievement, and a victory for the citizens of both Mexico and the United States." Colombia's President Juan Manuel Santos telephoned Peña Nieto and congratulated him for the arrest of Guzmán, highlighting its importance in the international efforts against drug trafficking. 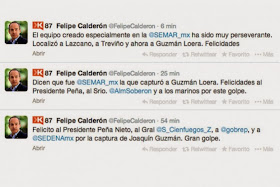 News of Guzmán's capture made it to the front lines of many news outlets across the U.S., Latin America, and Europe. On Twitter, Mexico and Guzmán's capture were trending topics throughout most of February 22, 2014.