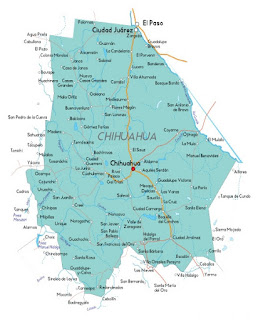 Five members of a family were shot to death Monday night in far southern Chihuahua state, according to Mexican news accounts.

According to a new report posted on the online edition of Milenio news daily,four armed suspects staged an ambush along a dirt road at around 1930 hrs in Guadalupe y Calvo municipality in Baborigame.

The victims were identified as Adelina Carrillo Gutierrez, 61, Jesus Chaparro Loera, 63, Wenceslao Chaparro Carrillo, 36 and two unidentified children ages 11 and 7 were traveling aboard a GMC Sierra pickup truck when the shooting took place.

Several AK-47 and AR-15 spent cartridge casings were found at the scene by investigators.

Guadalupe y Calvo has seen an increase of violent security incidents in recent weeks, the last incident an apparent ambush in a remote part of Guadalupe y Calvo, which claimed the lives of four individuals.  A previous incident of the kidnapping of a political candidate just a week before that shooting preceded a renewed deployment of Mexican federal security deployments including army and naval infantry troops to the region.

The Gendarmaria Nacional which will operate under the auspices of the Policia Federal, was the centerpiece of the new security strategy by the recently elected President Enrique Pena Nieto.  The emphasis in the  new strategy was to reduce drug and gang related violence which has plagued Mexico for the last several years.

According to a news report posted on the website Animal Politico, Osorio Chong in a radio interview with Joaquin Lopez Doriga, reiterated his government's commitment "in the coming years" to a "news justice model".  The aim, according to several new accounts is to reduce the involvement of Mexico's military in counternarcotics operations, long an objective with Mexico's political left.

The news is a seeming reversal since mention of the Gendarmaria Nacional was omitted from the Plan Nacional de Desarrollo or National Development Plan last May, a move Mexican press claimed was a reneging of a campaign promise Pena made a year ago, despite reepated announcements since Pena's inauguration.

According to a separate news account, in the first stage of the Gendarmaria Nacional plan, a total of 8,500 soldiers and 500 naval infantry troops would be included in the new security force.  It is unclear in Osorio Chong's latest announcement if that part of the plan has been followed.  Osorio Chong has said in the past the the new Gendarmaria Nacional would have both police and military training, which suggests that SEGOB has been or will be moving some elements from the army and navy into the GN.

When the elements of the Gendarmaria Nacional are ready to be deployed, they will likely go to the worst of Mexico's trouble spots, mainly on the northern border where the most intense of the drug and gang related violence has taken place over the years.

One likely location will be southern Chihuahua state.  Earlier this year Chihuahua governor Cesar Duarte Jaquez had announced that Gendarmaria Nacional troops would be deployed to the region which can now be seen as a rather premature announcement.

Chris Covert writes Mexican Drug War and national political news for Rantburg.com and Borderland Beat.com. He can be reached at grurkka@gmail.com
badanov Posted at 9:00 PM
Share