by Chivis Martinez for Borderland Beat 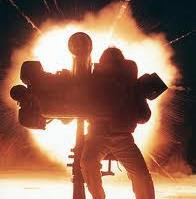 As the drug war progresses the transitive nature of this war is a study in of itself.  Apart from struggling to realize sheer numbers of dead and missing, elements of war not often written about on a Mexican Drug War blog are essential to determine where the war is and where it is heading.


The spread of Mexican cartel activity worldwide has been a rapid fire phenomenon that has resulted in Mexican cartels now being considered the world’s premier provider of street drugs.  Last week Mexico announced the estimated number of cartels, splinter groups, enforcers groups and gangs wanting their piece of the financial pie is now 80.  Others estimate the number to be 100+.

Increasing cartel presences in Central America have tiny, fragile nations under the thumb of some of the powerful cartels.  Guatemala is an example. By its own estimation 75% of the country is under the control of cartels, namely Los Zetas, with the Sinaloa Cartel also having a good presence in specific areas of the south and a portion of the north border.

It is not difficult to understand the importance of Central America to cartels, as trafficking routes restructured to accommodate both the US and Europe.

US cocaine use has tumbled in a decline since the late 80s.  It is estimated that 60% of street drugs usage  in the US is marijuana, with RX comprising the bulk of the remaining 40%.  One can envision a scenario wherein knock off RX manufacturing would be conducted openly in Central American labs.

Additionally intellectual marketing products and other knock off products could concentrate production in Central America, diversifications now comprises 50% of the cartel product and resource line.

Watching the ever evolving cache  of weapons  lingering at the aftermath of shootouts, I wondered what they represented in the changing war.

I immediately thought of Dr. Robert Bunker as a go to person for answering some of the questions of narco tactical and weapon advances focusing on MANPADS and other weapons..

The US Bureau of Political and Military Offices describes MANPADS as follows:


Man-portable air defense systems (MANPADS), commonly described as shoulder-fired anti-aircraft missiles, are surface-to-air missiles that can be carried and fired by a single individual or carried by several individuals and fired by more than one person acting as a crew.

Most MANPADS consist of: 1) a missile packaged in a tube; 2) a launching mechanism (commonly known as a “gripstock”); and 3) a battery. More modern MANPADS also contain a separate missile ejection motor. The tubes, which protect the missile until it has been fired, are normally disposable.

Rudimentary sights are mounted on the tube. The missiles themselves are usually comprised of a flight motor, a warhead, a control section and a guidance section that directs the missile toward the targeted aircraft. A single-use battery is typically used to power the missile prior to launch.

MANPADS launch tubes typically range from about 4 feet to 6 1/2 feet (1.2 to 2 meters) in length and are about 3 inches (72 millimeters) in diameter. Their weight, with launcher, ranges from about 28 pounds to just over 55 pounds (13 to 25 kilograms). They are easy to transport and conceal.

Some of the most commonly proliferated MANPADS can easily fit into the trunk of an automobile.﻿


Dr. Bunker is a Senior Fellow, Small Wars Journal and Adjunct Faculty, School of Politics and Economics, Claremont Graduate University.  He is an author for The Strategic Studies Institute  and spoke before the Foreign Affairs Committee giving testimony before the House Foreign Affairs Subcommittee on the Western Hemisphere at the Hearing ‘Has Merida Evolved? Part One: The Evolution of Drug Cartels and the Threat to Mexico’s Governance.’

About MANPAD weapons   like SA24 or RBS70 do you know at what price they would sell at on the black market? 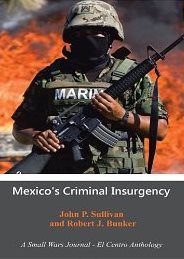 The SA24 Grinch, which has only been in production since 2004, looks to be too high end for Mexican cartel use. Still, dozens of MANPADS turned up in Algeria in February of this year— many of which were SA24s—so these systems are out on the black market due to the recent civil war in Libya. The much older Swedish RBS 70 would be a better fit if the cartels decided to go down that path. My guess is you are thinking about some sort of Venezuela to Colombian FARC to Sinaloa or Zetas type of transfer.

I don’t think the black market price matters in the context of Mexican cartels. If a cartel really wanted a few of these systems, it could easily pay a multiple of the going black market price. Say a lower end system was going for $50,000.00—Sinaloa has the resources to offer ten times that number and not even blink an eye over it.  Over the long term, they would not purchase MANPADS that way but for a few systems it would not break their bank.
Do you see that as a plausible next progression in the Mexican drug war?
Yes and no. Yes, if a cartel wanted an anti-helicopter capability against Mexican federal police and military assets beyond that provided by RPGs. The lower end systems would likely be more than adequate to do the job. I have read about Mexican governmental helicopters forced down due to cartel small arms fires.

Have not heard of one hit by an RPG, however, and that would be an escalatory step towards low end MANPADS. Also the Barrett .50 cal rifle can be used in an anti-materiel role—not while a helicopter is flying—but when it’s on the ground and more vulnerable. Have not read about that taking place either yet. I presently see no reason why the cartels would acquire MANPADS for anti-passenger airliner capabilities vis-à-vis a traditional terrorist attack scenario. I also don’t see such systems presently being utilized for assassination attempts against Mexican officials.
If not, what would be?
I’d still focus on RPG and Barrett .50 cal rifle use in an anti-helicopter role as far as emerging trends—we should be on the look out for news, blog or tweet reports of such incidents. I know Marijuana growers have used steel cables in the past too in Mexico so you can go low tech also. Another possibility is anti-helicopter mines in an ambush scenario but that potential seems too far out for the Mexican cartels currently.
As far as other areas of progression, we should keep our eyes on the evolving use of cartel car bombs in Mexico and also indirect fire systems such as mortars and rockets. We are gradually seeing more and more car bombings take place. As far as mortars and rockets, we are getting news reports of a few systems being recovered and even some mortar rounds.

Crossover incidents might see a car bomb with a few RPG or mortar rounds wired into the improvised explosive device (IED) to enhance the effects of the detonation—but that might be more sophisticated than the present ‘state of the art’ currently achievable by the cartels. Also the Claymore anti-personnel mines and/or knockoffs recovered are of concern because they can be devastating when properly used in ambush scenarios. 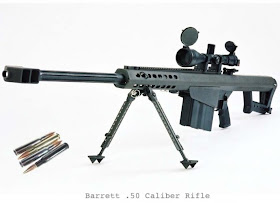 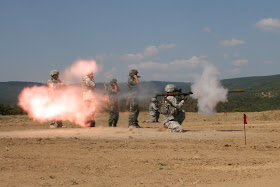 How would they be used, in other words to accomplish what?
If the cartels acquired low end MANPADS, I think they would look to foreign mercenary support concerning system upkeep (the batteries et al), tactics, training and possibly even operation. MANPADS provide better targeting (kill probability) against helicopters at stand-off ranges than RPGs which are a closer in system. Expect deployed MANPADS to have RPG and assault rifle armed security teams protecting them as part of a layered defense system.
The intent of using MANPADS would be to neutralize federal law enforcement and military helicopter gunships, troop transport, and scout/spotting craft. By having the capability of destroying such craft, the Mexican cartels could attempt to achieve an ‘area denial capability’ in the airspace over which they conduct their operations. My educated guess is that, if we see a MANPADS deployed, it will first be by the Zetas somewhere in Northern Mexico but others can create scenarios which are just as plausible—even in various Central American countries.
Have you seen the progression of weapons advancing at a faster pace as far as elevating both the quality and destructive capabilities of the weapons known to be used by cartels?
Two Mexican cartel weapons and tactics ‘firebreaks’ look to have taken place via the Tijuana and the Gulf cartels. The first firebreak saw the AFO (Arellano Felix Organization) employ members of the US street gang (Logan Heights/Calle 30) under David “Popeye” Barron who also, it turns out, belonged to the Mexican Mafia. The use of the gang members as mercenaries really upped the violence and general audacity level of some of the operations.
It also can be considered a first attempt to be more professional-like in some of the tactics—though given the fratricide of Barron and the basic mistakes made, such as the accidental killing of Cardinal Posadas Ocampo at Guadalajara Airport—they fell short of this goal.  The second firebreak is the well-known Gulf cartel employment of the former Mexican special forces deserters— the Zetas.
-Continues on next page-

They militarized the cartel wars with tactics, training, weaponry, organization, and other innovations. This is the big spike regarding quality and destructive capability because it dramatically changed the conflict environment and forced all of the other competing cartels to upgrade their enforces (foot soldiers) to a paramilitary level. Since that time, we are seeing marginal upgrades in some weaponry capabilities since we have a three-way arms (capabilities) race taking place between the forces of cartel vs cartel vs the Mexican government.
One intent of splintering the various cartels, including the Zetas and La Familia, is to devolve and degrade the capabilities of the major cartels—which will hopefully reverse the arms (capabilities) race that we have seen over the last decade or so since the rise of the Zetas.
What cartel, based on what is found in conflicts with police agencies, is the best equipped?  [and the Mexican military?]
From the weapons caches recovered, the Zetas. Though Sinaloa is also viewed as having substantial weapons stockpiles. The difference is that the Zetas appear more tactically and operationally focused while Sinaloa appears more strategically focused—they have different ways of approaching criminality and the illicit economy—how they are profiting from it and just different organizational philosophies.
Is there a method to measure the knowledge or quality of training?

Yes.
Basic tactical and operational analysis can be conducted concerning specific incidents (and their aggregate) along with operations within the various plazas and cartel AO (area of operations). The problematic issue is getting the basic data—much of which is never reported by a beaten down and compromised press in Mexico. Then, it is finding someone with the expertise and time to undertake that analysis.

The deeper you get into this it starts to become sensitive for Mexican military operations vis-à-vis cartel capabilities—so none of us, including the Borderland Beat readers, are going to see the end product of such analysis. Still, at Small Wars Journal, Insight Crime, Stratfor and other venues, we do what analysis that we can with the information we can get our hands on. 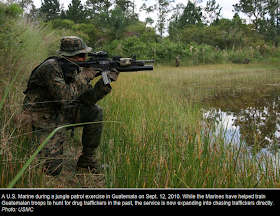 As for US troops in Guatemala, my calculation says 350 troops since last January, though I concede I could be way low.  The big news is they are being deployed to directly engage with cartels, specifically power cartels such as Zetas and Sinaloa.

The photo above is from an article in Wired Magazine Marines vs Zetas: US Hunts Drug Cartels in Guatemala

Note: Dr. Bunkers Tactical Reports are posted by Buggs here on Borderland Beat.
A big thank you to Dr. Bunker!

More on Dr. Bunker:  He has over two hundred publications, including edited and co-authored books, and specializes in terrorism, homeland security, and international security. Collaborative works include Criminal Insurgencies in Mexico and the Americas (Routledge, 2012), Narcos Over the Border (Routledge, 2011), Criminal-States and Criminal-Soldiers (Routledge, 2008), and Networks, Terrorism, and Global Insurgency (Routledge, 2005).
Chivis Posted at 1:47 PM
Share