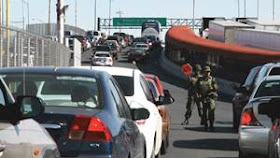 The organization that is lead by Joaquin, El Chapo Guzman has  replaced the Juarez Cartel in controlling drug trafficking in Ciudad Juarez, Chihuahua and  El Paso, Texas.  It has  increased the transfer of cocaine, heroin and methamphetamine. There is now a major availability of these drugs in west Texas, says a report of the Justice Department of the United States.

The document, elaborated by the National Intelligence Center of Drugs (NDIC) in an analysis about the market in the region, emphasize that the Sinaloa Cartel “increased their influence over lucrative smuggling routes in Mexico and West Texas region”, a zone that since 2007, the organization  lead by Vicente Carrillo Fuentes.

The plaza is strategic for the drug traffickers, since it has four of the seven official border entries to west Texas: The Americas bridge, North Pass, Stanton Street Bridge and the crossing of the International Bridge Ysleta (The complete part of El Paso bridge).

The report includes facts through 2011.  Details that in  the last year, indicators suggest that the Sinaloa Cartel won this battle. It already has a major influence over the drug contraband in the Juarez Valley and now domains the contraband drug operation carried out in small towns throughout the Rio Grande, once controlled by the Juarez Cartel”.

Police information that is stated in the document, indicate that the Sinaloa Cartel domains drug transportation in all Juarez Valley, even in the cities of Guadalupe and Porvenir  “and the rival members of Juarez Cartel have now abandoned those areas.

He pointed out that even in Ciudad Juarez; the organization of Carrillo Fuentes has lost territory against the onslaught of cells supporting El Chapo: “The Sinaloa Cartel is proactive in search of any opportunity of having domain over the Juarez Cartel in this city, while the Juarez Cartel operates defending their territory, trying to neutralize the losses caused by the rival group”.

The Juarez Cartel hasn’t lost complete control due to the connections with the group Barrio Azteca – gang classified as the most violent-, “the cartel is weaker” because of the arrests and deaths of members and partners, it is stated.

The impact of the outgrowing influence of El Chapo in the region, has turned into an increase in drug trafficking. While in the period of 2006-2010 showed a decrease in the availability of illegal drugs, after 2011, it started to rise again.

The report explains that  a high volume of methamphetamines exists  in West Texas, that it is   also distributed in the schools,  “which could be the result of the capacity of the Sinaloa Cartel to produce in high scale, these drugs in Mexico, and the growing influence in El Paso- Juarez”. It is also known that “the availability of cocaine, increased in the region”.

NDIC projected  that the high level of Ciudad Juarez is not going to  decrease further,  it even “might increase if the Sinaloa Cartel attempts to reduce more of  the capacity of the operations of drug trafficking of the Juarez Cartel.  However, the criminal group has now  increased other areas of crime for revenues, such as intellectual market counterfeit, extortion and kidnapping.