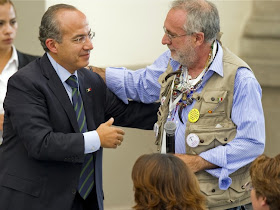 Mexican President Felipe Calderon urged civil society and the authorities to join forces in an effort to halt violence against human rights defenders and journalists, as well as candidates in next year’s general elections.


“I am reiterating to all federal entities my instruction to implement effective mechanisms to protect human rights defenders and journalists,” the head of state said Friday during the 2011 National Human Rights award ceremony.

Calderon said civil society and the authorities must join forces to ensure the safety of members of grassroots organizations, reporters, politicians and ordinary citizens and guarantee the survival of Mexican democracy.

“This is an urgent task that demands our full attention,” Calderon said, adding that organized crime is the “primary threat” to democratic institutions and the rule of law.

He said it is regrettable that federal, state and local governments have not yet been able to “contain the wave of aggression and violence against activists, journalists and also candidates and (government officials).”

Journalists have increasingly been targeted in recent years by drug traffickers and other organized crime groups, especially in northern Mexico, while media members must also contend with long-running abuse at the hands of federal, state and local officials.

Numerous mayors and other politicians also have been slain in recent years in Mexico, while a candidate for governor of the northeastern Mexican state of Tamaulipas was murdered in 2010.

The strategy has led to headline-grabbing captures of cartel kingpins, but drug-related violence has skyrocketed and claimed nearly 50,000 lives nationwide over the five-year period.

Calderon has been under pressure from rights groups both in Mexico and abroad over his deployment of the military and his past claims that the vast majority of victims of drug-related violence are criminals themselves. 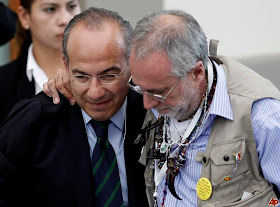 This week, a member of the Movement for Peace with Justice and Dignity, which is led by prominent Mexican poet and peace activist Javier Sicilia and has been highly critical of Calderon’s security policies, was abducted and killed.

According to the MPJD, the activist had received threats from organized crime gangs and paramilitaries yet still had not received the protection he had requested through the Inter-American Commission on Human Rights.

Two other members of MPJD, which the 55-year-old Sicilia founded after his son was brutally murdered earlier this year by suspected drug-gang members, also were abducted this week.

New York-based Human Rights Watch, meanwhile, said in a recent report that it questions Calderon’s claim that “90 percent of the victims of drug-related deaths (between 35,000 and 50,000 over the past five years, depending on the source) were criminals.”

It noted that the Mexican Attorney General’s Office only opened 997 investigations into drug-related murders between 2007 and August 2011 and that “federal judges have only convicted 22 defendants for homicides and other offenses tied to organized crime.”

HRW also said that Mexican security forces, far from bringing peace and tranquility to the country, have committed “widespread human rights violations” within the context of the country’s drug war.

“Instead of reducing violence, Mexico’s ‘war on drugs’ has resulted in a dramatic increase in killings, torture, and other appalling abuses by security forces, which only make the climate of lawlessness and fear worse in many parts of the country,” the organization’s Americas director, Jose Miguel Vivanco, was quoted as saying in the report.